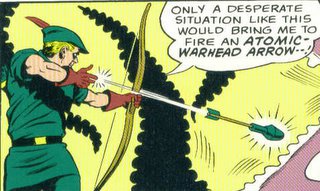 Thanks to the Showcase series, I think I'm starting to "get" Green Arrow: Green Arrow is the most brilliant Batman parody ever created.

At least, it reads much more easily if you take that perspective. Everything that was ridiculous in Silver Age Batman? It's there in Green Arrow, only ten times worse. Ridiculous gimmick gangs (I liked the Balloon Bandits best), giant extradimensional aliens, the flaming green arrow signal (sounds safe, huh?), alterethnic knockoffs of our hero, the jealousy scenarios with the sidekick, the time travel -- and the arrows just make it that much worse. Green Arrow makes Batfink look like homage.

For the next week (and one week only!), we'll being running a very important poll to determine The Most Ridiculous Arrow Award (the polling mechanism is in the sidebar). The following are not eligible: arrows used by clowns (like Green Error and Funny Arrow), intentionally ridiculous arrows invented by children, any arrow used by Miss Arrowette (all of which are not only ridiculous but ridiculously sexist).

And the nominees are...! 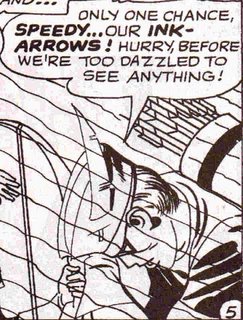 A Fountain-Pen Arrow. So, do you stick those in Our Ink Arrows, or what? 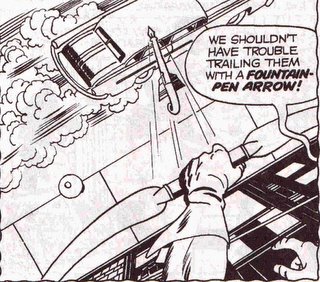 Tumbelweed Arrows! How do those fit into a quiver? 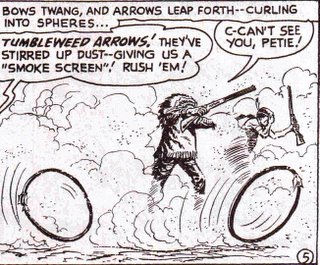 My Paint-Brush Arrow. What color is it?!?!?! Damn those Showcase Editions! 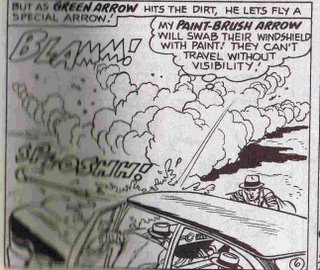 The Antler Arrow. I have to confess, as the son of a hunting guide, the Antler Arrow is my favorite. Dale Totaltoyz is making me several. Can't wait to spook the dog with them.

This Chimney-Sweep Arrow. Ollie and Roy have way too much time on their hands. 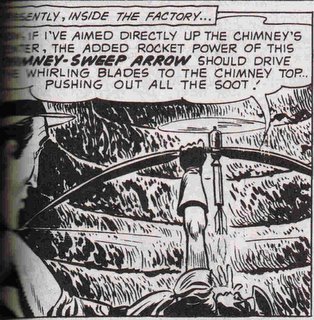 The Mummy Arrow. Yes, that's what they call it. 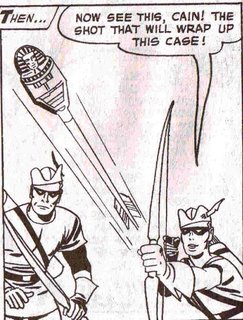 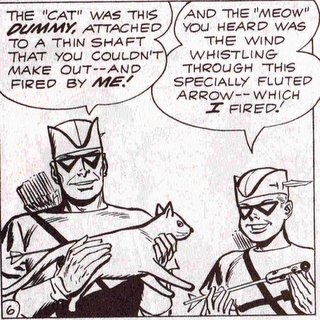 Smart money's on the Plastic Cat Arrow (with Meow Arrow). Another one I can't wait to try on the dog.
Posted by Scipio at 7:14 PM

What in the Hell does a Mummy Arrow even do?

Naturally, they encased the tip in a tiny sarcophagus. That's class, people.

Man, half of those aren't even areodynamic. And yeah, plastic cat arrow=mind-boggling genius stupidity. If I were a member of the Justice League, every time Green Arrow started going on about how we don't do anything for the little guy and what about the black skins and blah blah blah, I would just shout "Plastic cat arrow!" at the top of my lungs.

"You see, Roy, I just shove the shaft into this opening in the plastic pussy... ."

I think if I'd have been Ollie's ward, I'd have become a junkie, too.

"half of those aren't even areodynamic."

And how, exactly, is the antler arrow supposed to work?

Other than the obvious way of impaling the tyke in several places.

I got the general idea of all of them, however insanely stupid, except the Antler Arrow. I know it's apparently perfect for the problem at hand, but what the hell kind of problem is solved by an Antler Arrow??

I'm surprised no one's commented on the Paint Arrow. Suddenly, it makes sense that Green "I can contain an exploding sun with my mind" Lantern would consider Green "Hehe, I shoot stuff" Arrow a valuable partner. The paint arrow can undo any yellow disaster with minimal trouble.

And, as a safeguard against the nasty mind-control and temporary insanity bouts that Hal suffers from, Ollie carries at least one yellow paint arrow. Just in case.

Keeping this in mind, I respectfully petition that the Paint Arrow be taken off the ridiculous list.

"what the hell kind of problem is solved by an Antler Arrow??"


Why, a rampaging moose, of course.

Heavens, have you people never fought crime (and rampaging wildlife) with arrows before?

Meow Arrow is the winnah!

At least, until you produce the Vibe Arrow.

"The paint arrow can undo any yellow disaster with minimal trouble."

I hope to God we start see Green Arrow using these trick arrows on Justice League Unlimited (as soon as it comes back). I imagine scene with the plastic cat and meow arrow would go something like this:

Cheetah leaps out of nowhere and starts attacking Black Canary. Ollie, thinking on his feet, grabs his pussycat arrow and fires it at Cheetah, thinking that either the impact of the "arrow" or the fact that it's shaped like a cat will stop Cheetah somehow.

Black Canary: What the he-?

Cheetah grabs the arrow and looks at it, stupified.

Cheetah: What in the name of my five week old furballs have you hit me with?

Green Arrow: What? My mighty plastic cat arrow failed? How can this be?

Black Canary: Plastic what arrow? Have you been borrowing from Speedy's personal stash again?

Cheetah: Exactly how was this supposed to stop me?

Black Canary (thinking): That's it, the next time I break up with him, it's for real.

Cheetah (thinking): How have we not beaten these idiots yet?

Green Arrow (thinking): I knew I should have used the chimney sweep arrow.

Oh, and Ragnell, in "Crisis On Earth-One" (which I have thanks to the "Crisis on Multiple Earths" collection), Green Arrow uses a lead paint arrow to cover up a kryptonite fire hydrant, so you may have a point about its usefullness.

Of course, some kids wound up getting lead poisoning from playing with a lead painted fire hydrant, but sacrifices must be made to keep Superman alive.

Later on, I'll be happy to run a "Best Use of Plastic Cat Arrow" contest.

How would YOU use a plastic cat arrow to fight crime, in 100 words or less?

I am pretty impressed with how compact the "atomic warhead arrow" looks in that (I think) Justice League story. I'm disappointed it didn't make the list.

alterethnic knockoffs of our hero

I read that story a DC Digest waaaaayy back in my past. I only remember it because I thought the Mexican version should be called Sombrarrow.

I always felt bad for Connor. Being a legacy character had to be difficult regardless, having *that* for a predecessor...

Did make for a funny JLA scene where he's trying to find something legitimately useful among his dad's trick arrows though. :-)

shouldn't it be the best Plastic Cat Arrow haiku?

I thought about it, but didn't put the atomic warhead on the list for two reasons. First, I already posted on the absurdity of it before, so I thought it would have an unfair advantage. Second, although it ridiculous, it is not ridiculously useless.

I mean, which would stop you faster...

"I mean, which would stop you faster..."

I have to confess, as the son of a hunting guide, the Antler Arrow is my favorite. Dale Totaltoyz is making me several.

Yeah, right after the complete set of Green Arrows of the World HeroClix!

Too funny! They could team up with the forthcoming
"Green Lanterns of the Universe" special set they are producing.

The atomic arrow, while ridiculous from a practical standpoint, isn't *that* far off from reality:

"The physically smallest nuclear warheads deployed by the United States was the W54, used in the Davy Crockett recoilless rifle; the warheads in this weapon weighed about 23 kilograms and had yields ranging between 0.01 and 0.25 kilotons."

I also omitted the Bait Arrow and the Monkey Parachute Arrow.

Monkey parachute arrow? MONKEY PARACHUTE ARROW? That's it, I have to start buying these Showcases, if only so I can awe my friends and family with my extensive knowledge of awesome things like the monkey parachute arrow...and so that I can build a shrine to it in my closet.

Just answer one question for me though: was the monkey parachute arrow used to fight refuges from the Orangutan Surfing Civilization?

As the JLU GL said: "And Black Canary said a buzzsaw arrow was self-indulgent."

I'm not going to vote for an arrow, but just suggest my take on the Silver Age GL stories in general: Each one details a particular, separate acid trip that bearded Ollie took in the mid-sixties.

Escaped rare monkey refused to come out of tree. Out comes the monkey parachute arrow.

I like Follower's theory. Both Ollie and Roy are drugged out hippies who've hallucinated most of their past.

Oops. I of course meant to use the initials "GA."

My favorite is the aqua-lung arrow, which not only served as an obvious influence for Jethro Tull but served the valuable function of providing its victims with spare oxygen for going underwater.