In discussions about "Character Donations" and what characters should be revived and which forgotten, I've been told more than once: "Remember, every character is someone's favorite." 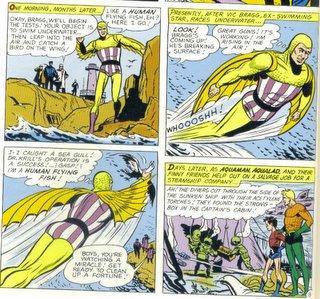 Now, I understand the sentiment. I, myself, have an appreciation for some characters that many people do not (fools! the utter fools!).

I guess some people's minds just aren't strong to handle the glories of the like of Vibe, the Golden Age Starman, the Penny Plunderer, and THE AWESOME HUMAN FLYING FISH. Their loss!

And when such people prattle on about how such characters are "lame" (usually without any elaboration as to what that means) I can't help but warm up the uzi. So I understand the sentiment ... in principle. 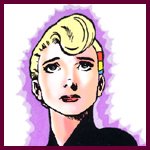 Sleez? Any of the 427 crappy characters created by Threat to Society Mike W. Barr? These are not anyone's favorite characters -- not outside Arkham, anyway.

A character does not need to be anyone's favorite to be a legitimate and useful addition to the DCU. But there should be limits, don't you think? And if so, what are they?

Confess! What characters do YOU love that you get made fun of for loving? I promise not to say a word!
Posted by Scipio at 7:44 AM

Bless me Father, for I have sinned. It has been too long since my last confession. My sin is against common sense and good taste. I harbor an unnatural affection for several superheroes deemed... less than super, by some.

The most egregious of my sins of poor taste is my hope that somehow, someway, a writer more talented and motivated than I brings back Maggott. Yes, with two Ts.

One of several unloved X-Men of the '90s, Maggott was a South African youth whose digestive system could manifest itself as twin metal worms (which he named Eeny and Meany). Said worms could digest ANYTHING. When they went back into his body, Maggott could manifest superstrength and turn blue.

Why do I like Maggott when 99.9% of the comic book reading world detests him? I liked how odd his powers were. I liked how cocky Joe Kelly wrote him. I liked his overall look (skinny, blue, sunglasses, funny haircut, twin metal worms). I liked his overuse of idiosyncratic slang.

Of course, they killed Maggott in some forgotten X-spin-off. Wouldn't you? Not I! I wanted to see him in the Avengers, taking on Ultron and Dr. Doom! It seems I am alone in my Maggott fandom.

I've ALWAYS loved the 3rd-string characters, especially the villains. Blame it on empathy, sympathy, or easily-amused whimsy, but I get a kick out of the guys that have no real business putting on the spandex.

On the Marvel end, keep your Dr. Dooms, Ultrons, and Magnetos, for my favorite villain is none other than the Stilt-Man. He's followed closely by the Leap-Frog and the Gorilla-Man (the one from the Headmen). My picks read like the Scourge's Christmas list.

When it comes to DC, there's SOOOO many great baddies. The greatest Bat-foe of all time is Killer Moth (followed closely by the Ten-Eyed Man and the Signalman). My favorite Superman villains were the Master Jailer and Bizarro #1 (this was before Bizarro became chic again in recent years). The ultimate Rogue was, and will always be, Captain Boomerang Senior (the Top comes in second). And when it comes to Green Lantern, I can't get enough of the Tattooed Man.

And just in case any of you are curious...no, I am NOT being sarcastic. These characters are near and dear to this fan's heart.

Chronos is just cool beyond words. THe mask! Those pants! It's like an awesome explosion.

I really love the Power Company. So sue me. IT HAD FASTBALL IN IT!

And by the way, why all the hate for Kadaver?

That guy cracked me up, with his morbid fetishes and habit of scaring his lackey by feigning death.

He reminding me of one of those UHF horror hosts gone all super-villain.

Straying outside comics fandom for a minute, I am inordinately fond of the character Susan Bones from the Harry Potter books. See, I have this long-held theory that Susan Bones will be a major player before the series is over, so I can't help but judge every new entry in the series by the degree to which Susan Bones plays a part. (The most recentfilm was a big disappointment.) My friends mock me for my beliefs, but I'll show them.

I confess my love of Crazy Quilt, the only villain who hated Robin much much more than he hated Batman.

I actually liked Halo, though she seems like she belongs in Excalibur. It's probably the fact that she was drawn by Alan Davis.

I don't get made fun of for loving them, because I don't speak of my shameful interest, but I actually thought Helix was kind of cool. On the Marvel side, I like the idea of Doc Samson --- a psychiatrist who solves things by punching people! Genius!

The most powerful member of the Legion of Super Heroes: Matter-Eater Lad.

"But he could eat Superman" is, oddly enough, not a convincing argument for most people.

Also, Cypher from the New Mutants.

The Ray, for whatever reason, he's appealed to me since his six issue mini-series back in the '90s. I really would have liked to see him join the Teen Titans (he could take over Starfire's role as flier/energy shooting person), instead I see him getting beat along with the rest of the Freedom Fighters in Infinite Crisis. Damnit.

On the Marvel side, Darkhawk, he looked cool, I liked his powers, and the Puma. I really enjoyed this whole "I hate Spider-Man, but I'm indebted to him, so I'll buy the Bugle and make it pro-Spidey to repay him." Why not? Dudes freaking rich.

Firestorm! Original version most, although the half-russian Fire Elemental version was fine, too, as was the post-series solo Ronald Raymond version. Not so much on the African god one or the current one, though.

Oh, and I enjoyed the entire Wanderers series and wish they hadn't cancelled it. Sick, sick, I know...

I always liked the Bi-Beast, because the visual was so absolutely weird. Hulk faced lots of freakish foes, and Bi-Beast had the dumbest name and one of the dumbest looks. But wouldn't you be enraged if you looked like the Bi-Beast?

I've got quite a few.

No one brought up the Legion of Substitute Heroes? Are they not sad enough, or is it because they were designed to be sad and mocked?

Ooh, here's another one I just thought of: Vril Dox. But I'm not sure whether he's cool or lame these days. Which way has the pendulum of popular opinion on L.E.G.I.O.N. 'Ninety-Whatever swung these days?

The Thing That Walks Like a Man said...
I've ALWAYS loved the 3rd-string characters, especially the villains.

God, me too! I really enjoy the loser villains, especially the Marvel ones.

There's a certain group of fourth-raters at Marvel who used to band together on many occasions (and still got the snot kicked out of them). Most of them are dead now. They never had an "official" collective name, but I liked to refer to them as the Loser's League. The "core" members were the Eel, the Porcupine, Plantman, and Scarecrow. Occasional members included the Unicorn, Viper, Rhino and Solaar.

I always liked those Spider-Man villains turned heroes, Rocket Racer and Prowler. I wished they were used more often.

And that smooth-talking, high-life-living soldier of fortune, Paladin!

My favorites unloved ones are the ex-Outsiders Geo-Force, Katana (who is back), Halo, Looker and Black Lighting (okay he has been getting some love. He is also damm sexy in his 70s costume. Sexier then Vibe). I also love ex-JLAers from the 90s other then Booster and Beetle (who use to go unloved) or Enlongated Man: Crimson Fox, Ice, Fire, Captain Atom, L-Ron, Guy Gardner, The entrie Injustice League, Major Victory and Amazing Man. Also I am huge fan of the Human Defenese League that Devon spent a post making fun of.

Yeah, I wasn't always happy with the writing for those characters, but I always liked the concepts.

I don't know enough comic fans to make fun of my tastes but I've always had a soft spot for Cpt. Britian and Angel. I have no idea why - maybe some Freudian thing about blonde men?

I had forgotten Comet Queen....

For me, it's all about the barely used and forgotten characters. Give me Arrowette over the current Speedy any day (like Mia, LOVE Cissie). Her last issue was easily the best of that series, and then she hung up her superhero tights and was barely heard from again.

From Marvel, Cecilia Reyes, who vanished shortly after she was created, and then was killed and has been mentioned more since in passing than any other dead X-gal other than...JEAN (not a fave).

I always liked Maxima. She was arrogant, strong and constantly treating men like toys wether she was a hero or a bad guy. Whatever happened to her?

And I know they were just a cash in on Star Wars but I absolutely loved the Micronauts.

I loved Dr. Psycho before Gail Simone made him cool. : )

Steve Lombard, perennial loud-mouth loser.
Mal, from the Teen Titans.
Wandjina, is that right?, Silver Sorceress and BlueJay from the original Giffen Justice League stories.
Rocket Red too. All of them except #6, he still owes me five bucks.
The original Star Spangled Kid and Stripesy.
Dazzler. Wanna make something of it?

I was gonna say Dazzler, too. (Post-roller skates, what do I look like?)
Also, I second Doc Samson.
May I also add... Longshot.
(Yeah, I said it.)

On the Marvel side: My absolute, most favorite superhero team EVER is the Liberty Legion. So doofy... But soo... sooo colorful.

Inferior Five in the HOOOOUSE! God I love them. Also - Angel and the Ape is the greatest thing of all time.