Coming Soon to a Theater Near You 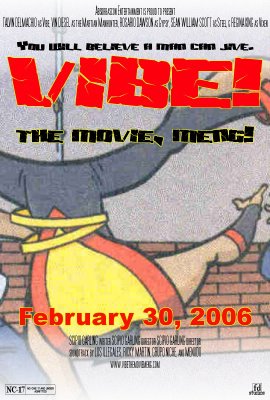 I would see that.

I would poop on that.

That's it, Devon; I've giving away your ticket to the premier.

You'll have to rent it from Netflix now.

I hear there are already plans for a sequel. Reverb: The Reckoning.

Coming Soon to a Theater Near You

And coming to the DVD section of your local Dollar Tree about six weeks later...

But it's not a real Hollywood movie unless you have some Anglo playing a major Latino part! Write in Catherine Zeta-Jones as the spunky Puero Rican love interest, huh?

Am I the only one who noticed it's rated NC-17?

Scipio, you sly dog, you.

And here's the casting for the Vibe movie:

Ok, only after posting the message above did I notice that the poster already contains the casting information. "D'oh" on the rocks for me, please.