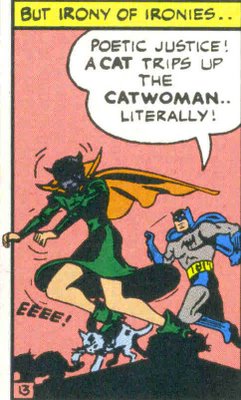 I mention "Comic Book Irony" a lot, and someone has finally asked me to explain what I mean. Note particularly 2a in the definition below (American Heritage):
Comic books teem with quiet irony. Well, mostly not so quiet. For example, see the panel above; in case you didn't get it, Catwoman's getaway being tripped up by a cat is IRONIC! If you don't notice it yourself, the narration panel points it out; if you skip that, Batman himself points it out for you. Jeez, you'd think they were writing for kids or something. 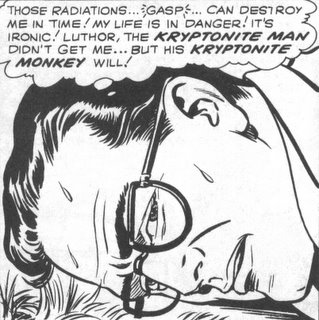 Here's another, one we've shared before: Death by Kryptonite Monkey. Poor clark; nothing's more embarrassing than having your obituary read "died of Kryptonite monkey related causes." Still, it would have given Beppo a FABulous "I shall avenge you!" scene; ah, well.

"Death by Kryptonite Monkey" is a multi-layered irony (unlike the simple cat-tripping irony above). Instead of dying glorious in battle saving Lois, Metropolis, the world, or the universe, Kal-El is about to die as Clark Kent face down in the dirt in some dark, forgotten corner of a public zoo (what kind of place IS Metropolis, anyway?).

Furthermore, his death is entirely accidental; the monkey isn't trying to kill him, no one is trying to use the monkey to kill him. In further irony, Luthor, who's been trying to kill Superman since God was a corporal, doesn't kill him. Supes is killed by an irradiated monkey abandoned from one of Luthor's experiments with kryptonite, and Luthor knows nothing about it and never would.

This is the PERFECT death for Superman. With all due deference to Alan Moore (oh, wait; I'm not allowed to use his name, am I?) this should have been "The Last Superman Story".

Both panels show another aspect of comic book irony: the characters are aware of it, and note it to others or themselves in no uncertain terms. Try it yourself and you'll see why they do it; find the opportunity to say "irony of ironies" to someone at least once a week. It's fun.

The comic book medium is so thoroughly saturated with irony, that we take it for granted, like fish who can't see the water. Peter Parker lets a robber escape because it's no business of his, then the robber kills his uncle. Delicate fop Ted Knight is the ubervirile Starman. The world's strongest man is a mild-mannered milksop. Apathetic playboy Bruce Wayne is the grim caped crusader. Two-Face becomes the very thing that destroyed Harvey Dent-- a gangster with a two-headed coin. Wonder Woman champions peace by beating the crap out of people. Slowpoke Barry Allen becomes the world's fastest man. The universe's most powerful weapon is run by the universe's least powerful brain. Oh, the comic book irony!

When I went to see M. Night Shamalyan's two films, "The Sixth Sense" and "Unbreakble", I knew the 'surprise' ending of each film about 7 minutes into the movie. My non-comic book reading friends were nonplussed; "how on EARTH did you figure that out so soon?" they stuttered.

Please! "And it turned out... I was one of them, too!" is the ending of at least 47 different EC horror stories. An ironic ending is what comic book readers expect; I didn't even understand that the endings were SUPPOSED to be suprises until my friends told me so. Oh, you mean, we weren't supposed to realize the guy with the bizarre disability, with a matching knickname given by cruel children, and wearing a purple outfit is the villain? Yeesh!

But if irony -- an incongruous, unexpected outcome -- is what we've come to expect in comic books, then is it still irony?
Posted by Scipio at 2:42 PM

Hate to do this to you, but Shamalyan's film is actually titled "Unbreakable." But you have a great article/site!

"But if irony -- an incongruous, unexpected outcome -- is what we've come to expect in comic books, then is it still irony?"

So the unexpected would become the expected. The ironic would no longer be ironic and the old expected outcome becomes the unexpected becoming ironic. That's kinda ironic, isn't it?

This comment brought to you by yksfkqts, the number one choice in word verification words since 2005.

Whoops. I think I have been using this word wrong. I have only ever used it in reference to Tony Stark.

" Hate to do this to you, but Shamalyan's film is actually titled "Unbreakable." "

Oh, foo! I KNEW that seemed wrong as I wrote it!

Thanks for the fix...

I like classic irony the best- you take certain steps to avoid a foretold doom...only to find those steps you've taken CAUSE your doom!!!!

Superman's death by monkey is good, but I would love a story where Superman goes out of his way to avoid the monkey only to find his actions bring him closer to the monkey!!! Dun-dun-DUNNN!!!

Superman points out irony in All-Star #1.

I don't think anyone uses comic book irony much anymore. (Except Alan Moore, I suppose. But that's almost like REAL irony.)

Like everything else wrong with comics up to and including the time I cut myself on a staple, I blame the fan turned pro mentality.

Irony is a literary tool. In the past, and ESPECIALLY the EC books, writers regarded comic book writing as a craft, and used tools of the craft to the best of their ability.

Current writers don't writes stories so much as they add to continuity. Their first exposure to superheroes was at age six or seven or whatever when complete immersion in the superhero world was still possible, and they still write with that seven year old mentality.

To use comic book irony means admitting that your fictional world is just a construct. The purpose of irony is for the writer to entertain the reader through the craft of writing a story.

Most current superhero writers can't use this because they don't think that they're writing a story. It's more important for them to affect the "lives" of the characters than to affect the audience with well executed storycraft, because they're still writing from that six year old point of view that anything that distances the characters from the fictional world they inhabit. Maintaining the illusion of a "real" world for their pet characters to live in becomes more important than writing.

Of course, there's more-than-a-few fans who want a fully immersive world more than a well told story as well, so maybe they're just writing for their audience.

When I first saw *Unbreakable* (which I absolutely love, btw), I was thinking "Huh, weird. I thought this one was supposed to have a twist at the end...."

I suppose *The Sixth Sense* might have gotten me, but I learned the surprise twist long before actually seeing the movie.

The twist to 'Unbreakable' was that you had a two hour origin movie that set up what should have been a great fight between Hero and Villain but just faded away to something that you have to wait to be continued in Identity Crisis.

Lest we forget, Sam Jackson's character is the exact opposite of "Unbreakable" Mr Willis. Thats a 100% guarantee that they are enemies, my girfriend hates me for pointing that out the second he announces his name to be Mr Glass.