Boy, big crossovers make you realize something:
we don't need all these extra characters cluttering up the DC Universe!

Time for that cross-company yardsale that the Absorbascon and Seven Hells like to call "Character Donations". Let's clear out some excess baggage, characters who aren't need now, certainly won't be needed after IC is done, and that Marvel might actually get some good use out of.

How about ... Doomsday, Conduit, Ruin, Bane, Hush, and Azrael?

All of them are "Living Plot Points" more than actual characters 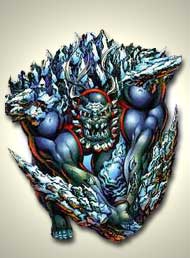 and, if there's any kind of retconning that comes as part of Infinite Crisis, the plots they are part of probably won't remain in continuity. DC can do without them (in fact, is doing without them already).

Marvelish names. All of 'em. And they could be fun at Marvel. Doomsday could be the social director on Monster Island. Conduit's your basic mutant freak (fess up; you don't even remember Conduit, do you?), Ruin and Azrael are all about the armored costumes, and Hush, well, Marvel doesn't have a mummy guy, whereas DC's got Negative Man and the Unknown Soldier.

Heck, at Marvel you could band them together as, say, the "Superfluous Six". They could have an annual meeting to decide which hero/antihero to pick on, and then hack away at him for a year in yer basic Marvel "trial by fire /test of character" storyline.

I'd like to shoot them off to Marvel using the cannon that shot off half of Jonah Hex's face.

The "Hex Cannon" will come in handy, I think.

Why isn't Artemis in this group? I expect that The Cyborg and that utterly forgettable devil guy who hypnotized Congress into making No Man's Land could make the entrance requirements, too.

Oh, and let's not forget Charybdis (the guy who shoved Aquaman's hand into a pool of piranha) and the Paralax entity...

I missed that! Do tell!

Guy's name was 'Nick Scratch'. Never got to read the stories myself, since they never collected "Road to No Man's Land" in a trade. Described as a 'scientist/rock star/talk-show host', which would make him basically an evil version of Buckaroo Bonsai, I guess. Azrael apparently took care of him of in his own book during the NML storyline proper.

One reason to keep them is that they might actually work okay as cheap cannon fodder in DC video games, which aren't in continuity.

Surely, the only thing more satisfying than sending them to Marvel would be the ability to pulverize these losers yourself in-game.

Nah... Despite the marvelish name, the Parallax entity is still a giant yellow bug monster from outer space. Perfect Green Lantern villain. Could be a classic.

Now, Artemis makes sense. That way, we can actually see the Goddess who has been removed from Diana's Pantheon in order to avoid confusion. It will also stop my utter annoyance that a woman from a middle eastern city of Egyptian Amazons (Yes, I know they were originally Greek, but do to the necessary requirements for breeding, ie local males, most of them are of primarily Arabic descent by now) is a whitebread redhead named in honor of a Themiscyran Goddess (when the Bana-Migdall tribe worships the Egyptian Pantheon!).
This way, we get the Superfluous Seven! Sounds a little better.

But I have an even better donation from the Wonder Woman stable.

She has become an IC plot-point character, and was an accidental creations anyway. The personality that made this character popular is now lost. She's no longer even romantic entanglement fodder. Apart from her regular game of "musical powers," she now only centers in stories that feature her death, resurrection, origin, or all three.
I suggest she merge with Jean Grey, who is clearly an alternate Earth version of her. (Rapidly varying power levels? Check. Dies often? Check. Does not know how to stay dead? Check. We have a match!)

"I suggest she merge with Jean Grey, who is clearly an alternate Earth version of her."

"Donna Troy... I suggest she merge with Jean Grey"

Oh dear god no! Jean Grey finally got written out of Marvel for the first time in years. We really don't need a replacement!

I think you have given these characters the least justification to go to Marvel so far. I don't really see the Marvel names, and you don't give any other reason for them to go except they are plot points. Every other character has had more reason to go than just being garbage. You've even made a point of donating to Image instead of Marvel before, because of where the character actually fit.

I hear ya, Chris!

Perhaps I was too elliptical in my justifications this time.

Everyone of them, except Azrael, has for a name a dangerous-sounding abstract noun (a la "Gambit").

DC's characters aren't known for being heavily armored (unlike Marvel's Iron Man and his 42 knockoffs, all of whom in the forthcoming "Armor Wars" Heroclix set). Ruin and Azrael are totally costume dependent.

Doomsday is your basic inarticulate Marvel monster from Monster Island.

Conduit acquired his powersucking powers from exposure to radition (like many Marvel heroes).

Hush, Bane, and Azrael are really just about how "cool looking" they are and have very little motivation to do anything that they've done. "Look first, motive later" is a pattern for Marvel villains.

Jeez, I haven't thought about Conduit in years. Thanks, Scipio, for bringing those memories screaming back into my brain!

And yeah, Jeff, you have it more or less right. He was Kenny Braverman, a retconned childhood pal of Clark, Lana Lang and Pete Ross who resented Clark's charmed life and vowed to kill him, and then tangled with Superman, and eventually discovered they were same guy and blah blah blah. He was around just long enough to get an action figure in the 90s and then disappeared, hopefully forever.

Azrael, Artemis, & Eradicator (has he been donated yet?) could travel back in time to 1995 and join forces with Thunderstrike, USAgent, War Machine, and Ben Reily as the Extreme Avengers.

I might leave Bane off this list, as he can be a pretty interesting character when done right.

But it strikes me that most of these characters are, or should have been, *one-shot* villains at best. Doomsday, I thought, was reasonably effective as a plot device in "Death of Superman." But there's just no way you can ever bring Doomsday back after that without it being anticlimactic. I mean, we know he ain't gonna kill Superman *again*, right? And if not, what the hell good is he?

Wait. Bane's supposed to be "cool-looking?"
What the Hell was up with the 90s?