When I Was Graduated from High School... 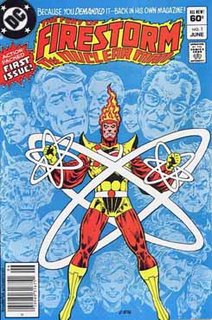 they published Fury of Firestorm #1 (because you DEMANDED it!).

Firestorm's heyday, brief and flickering like the candle he resembles, fell smack dab in the middle of the period during which I wasn't reading comics. You know, "adolescence", that period when you can no longer take childish delight in comic books but aren't ready to enjoy them in the layered way an adult does.

During adolescence, without the icons of DC to guide them, many people lose their moral compass and fall into various evils: sloth, dissipation, rebellion, wantonness, emotional overindulgence, Marvel Comics (9 out of 10 Kirby Cultists are lost to us during their teen years). Fortunately, I avoided all those evils until I was an adult (when I could really afford them).

As a result, I was spared Ronnie Raymond, the Peter Parker of the Post-Atomic Era. Ronnie, who skipped the spider-bite part and went straight for a huge dose of radioactivity. Check out that cover: classic Marvel ghost-heads of supporting characters from your private life. To me, Firestorm is the personification of DC's rejection of What It Does Best in an attempt to Ape The Competition.

Ronnie was the anti-Peter: stupid, handsome, stupid, athletic, stupid, and popular. Are the kinds of kids who want to read about a physics-powered hero really able to identify with a guy like that?

I think that's the secret behind whatever popularity Firestorm had (has?): readers didn't want to be Firestorm. They wanted to be Ronnie Raymond....
Posted by Scipio at 3:56 PM

I was about 11 when I first discovered Firestorm. I never found Ronnie, Prof Stein or any of the non-superhuman supporting cast all that interesting. But Firestorm himself was kinda cool...the flames coming out of his head, the billowy sleeves, the nuclear symbols all over the place. As a budding artist, I found Firstorm was a bitch to draw, but an interesting challenge. Actually it was Firestorm's colourful rogues gallery I found the most interesting. Yeah I know some were lame, make that many were lame. But characters like Black Bison and Killer Frost were awesome. It's funny how DC spent the late 80s and early 90's killing off a good chunk of Firestorm's villains, after making Firestorm himself unrecognizeable.

I wonder if you would say more about "the layered way" that adults read comics. I'd never really given thought to how I approach comics as an adult as being different from how I approached them as a kid, but I suppose there must be a significant difference...

My first exposure to Firestorm was his dynamic debut in the explosive first issue of his orginal series, which I purchased off the news stand when I was a wee lad of ten. I was immediately taken with the character; I think the idea of a hero with two secret identities appealed to me, and his deeply weird costume didn't hurt. Regardless, my early exposure to the character made me an enthusiastic and loyal reader of his later series, especially after John Ostrander took over the title in '87.

I liked Firestorm in the Conway issues. But it was seriously cracked that a jock's high school tormentor was a brain.

I'm so happy Cliff Carmichael is back! At long last, he's made his jump from bullying geek to true supervillainy!!