I don't add blogs to my links bar lightly (not 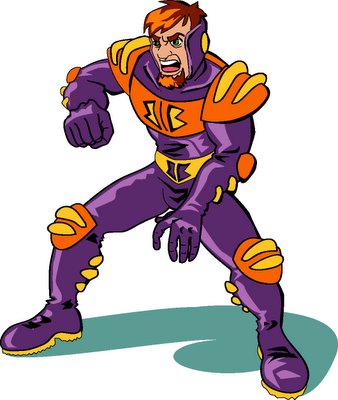 because I'm mean or snooty, but because it brings down my valuation on Blogshares; sad but true). But I simply must add "Blockade Boy"!

First reason: anyone who even remembers Blockade Boy gets a modicum of respect from me. "Ah," I nod, concealing an inner smile, "the royal we recognize you as one of the Comicscenti; in the New Regime, you shall not merely survive, but occupy a Place of Privilege; carry on."

So, imagine my joy upon discovering that the blog is written by Blockade Boy himself, who apparently faked his death in Adventure Comics #345 (hah, take that, Nardo!).

THEN imagine how I nearly fainted when I saw that Blockade Boy does costume re-designs on the fashion ill-favored! An obscure dead Legion character comes back to life, moves to the 21st Century, and reinvents himself as a costumer who helps others reinvent themselves. It's like ... like a beautiful dream come true. It's so--*sniff*--inspiring!

Learn Who Blockade Boy Is and How He Came To Be!

I, sadly, can only criticize the costumes of others, which is a destructive power; I am, in essence, a Fashion Supervillain. Blockade Boy, however, harnesses godlike powers of Costume Redesign, making him a Fashion Superhero. He makes me feel so.... ashamed.

Therefore, BB is the Absorbascon's new fashion consultant, and I hope at some point to be able to convince him to put forward some designs for some deserving characters. Is there anyone you can think of who needs a new superwardrobe?
Posted by Scipio at 8:40 AM

And Impulse, because that Kid Flash gear looks stupid.

And if we can jump universes, let's see Daredevil in a new costume.

Eh, let's see if you're really one of the Comicscenti; what was the secret of Blockade Boy II, supposedly BB I's brother?

He was actually Blockade Boy III?

No, he was Proty.

My multi-stage reaction to the fantastic honor you've bestowed upon me:
1. Stunned, gape-mouth disbelief
2. Tingling in the extremities
3. Girlish glee
4. Mannish glee, which is like girlish glee except the screaming is pitched much lower
5. A feeling of pride that is unbearable, especially to the people who have to deal with me on a daily basis

A million thanks, man! I'll do my best to live up to your high standards.

Who could use new clothes? Hmm:

Maxima, the Fury, the Ray, Black Condor (either version, really)...

Oh, and pretty much anyone still in a Perez-designed outfit.

Warbird (that sash around her waist kills me, it's so Dave Cockrum), Hawkeye (an archer needs gloves that protects his fingers and exposes his palms, but for some reason Hawkeye wears the opposite), Daredevil, Sentry (could his costume be any more generic?), Luke Cage (aping Shaft's style isn't the same thing as having a costume, Luke), Superboy (although the current black shirt is better than the leatherjacket period) and last but not least, Red Tornado.

These are all great suggestions, fellas! By the way, which Fury do you think needs my help the most -- mother or daughter? Or both equally? Come to think of it, both Infinity Incorporated and the Young All-Stars were hotbeds of ugly costuming. Not to mention the New Guardians... yikes!

No, it's probably best to leave the New Guardians forgotten. We can't risk the possibility of DC bringing them back. *shudders*

Isn't Fury the Younger wearing the Fury the Elder costume these days, anyway?