I'm thankful I don't work for a cigar-chomping, irascible, unreasonable tyrant, who is, on top of all that, clearly as crazy as a bedbug. 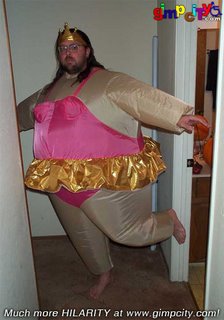 Setting aside the fact that he's forcing his Pulitzer winning reporters to do push-ups together ... "Mr. Rolly Polly"? Is that how the editor of a great metropolitan newspaper talks?

Mr. Rolly Polly (or "Roly Poly" which is how that phrase is usually spelled) could be the personification of weight gain. Or a rotund and deceptively jolly supervillain. Or a blubberous monster that haunts Perry's dreams and must be kept at bay through repetitive ritual behaviors, one of the 117 "invisible friends" that populate Perry's seriously disturbed brain and who looks something like the photo above.

Maybe Mr. Rolly Polly is Perry's nickname for part of his anatomy and he's making a veiled sexual threat to get his employees to follow his lunatic commands; I wouldn't put it past the old coot.

My only question is:
who is the hot guy staring down Lois's dress?
Woof!
Posted by Scipio at 8:37 PM

I'm surprised Jimmy can do three push-ups in a row. And he looks like he's enjoying it. I never would have thought the little punk had it in him.

Little known fact- Staring Reporter is the Metropolis cousin to Trampy Farm girl. Apparently in Pre-Crisis, only one genetic line actually had a sex drive.

"who is the hot guy staring down Lois's dress?"

And why is Jimmy giving a sweaty, worn out Clark the exact same look?