The Magic of Hex 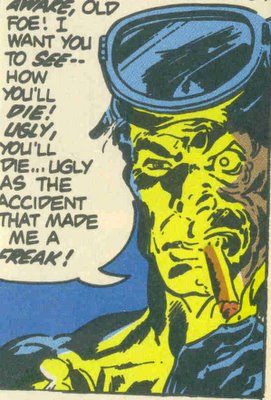 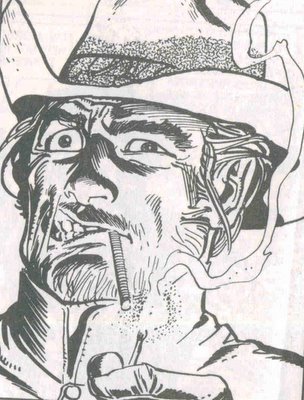 When Jonah Hex first appeared Westerns were, as Don Markstein puts it, "already passe`." But Jonah lasted another 13 years (not counting the two years following, when DC Mad- Maximized him by plopping him in a dystopian future -- don't ask).

Jonah lasted because he was weird and unique. He was part Two-Face (his appearance and interesting moral viewpoint) and part Batman (legendarily spooky and expert in what he does; oh, and rude). In fact, in BTAS he was alleged to be an ancestor of Bruce Wayne.

Not having read Western comics as a child, I'm a new convert to Jonah fanhood. But, following the recommendation of Devon of Seven Hells (who, after all, erreth not), I took the risk of reading the first issue of the new Jonah Hex series. I'm hooked! I won't spoil it for you but it duplicates the old Hex magic, right down to the sententious narration boxes characteristic of Western and horror comics.

Weary of heroes who ring their hands over routine mindwiping? Have a huge dollop of Hex. He still wrestles with moral dilemmas, but while he's doing that he still finds plenty of time to kill just about anyone who seems to need it.

Bottom line for me is, I enjoy Jonah Hex as a character for the same reason I enjoy Two-Face: his struggle with right and wrong challenges my own moral viewpoints and makes me think.
Posted by Scipio at 9:19 PM

In fact, in BTAS he was alleged to be an ancestor of Bruce Wayne.

My memory's not what it should be, but that doesn't seem right to me. As I remember it, the episode was about Jonah fighting Ra's Al Ghul and Ra's' son. I don't recall Batman being connected to Hex at all.

He showed up on JLU, along with Bat Lash, Pow-Wow Smith and El Diablo, but I don't think there was any connection to Batman there either. I hope I'm wrong about this, that sounds like a cool idea.

My first introduction to Hex was on BTAS actually. At first I thought he was Two-Face, which really confused my young, idiotic mind.

I love the Showcase collection, but when Michael Fleisher takes over the writing chores from John Albano, he pretty quickly demonstrates that Harlan Ellison wasn't wrong. I won't describe any of the scenes to avoid spoilers, but the sadism/perversity needle goes into the red immediately.

Actually, if you ever find it cheap, the last issue of Hex (#20, I believe) is about the saddest last page of any last issue I care to recall: still stuck in Mad Max-ville, he finds in a museum display case...I don't want to spoil it, but it would suck. A lot.
Need the new issue. And why the sam hell isn't there a DC Direct Jonah Hex figure? All of the sudden they can make Superman and Batman figures, so damned if they're not going to...

Chuck; but Jonah himself didn't consider that discovery sad. He was happy for what it implied.

But perhaps the fact that he didn't consider it sad it exactly what MAKES it sad...

Scipio, how you managed to resist calling this post "the Joy of Hex" is beyond me.

That last scene in Hex is easily one of my favorite scenes in all of comics.

When I hit my comic shop on Saturday, they had sold out of the Jonah Hex collection. Agh! They put one on order for me. After finishing the damn fine new Jonah Hex #1, I let out a second agh.

One of the great comic characters ever. I love that ugly nasty sumbitch, for the exact same reason Scipio does.

Plus, love that dialogue. "They say he's killed more men than typhus."

The opening of the new issue was dead perfect.

God, I love it when comics get it right.

I enjoyed the first issue of JH more than Loveless (and yes I know they are telling different stories but I can't help but compare the two). Although I'm left a bit flat about the whole "cruel and unusual" punishment is okay if it's done for the right reasons. It seems like a sloppy and obvious comment on current affairs. I know I could be reading too much into it but it didn't sit right.

Still, neither book has disuaded me from picking up the next issue. Anyone else kind of confused how DC managed to tell a complete story in one issue of Jonah Hex? :)

"Anyone else kind of confused how DC managed to tell a complete story in one issue of Jonah Hex? :)"

I like your term "complete story"; perhaps we can bring the term into general use....

I honestly do not have any idea what this could be refering to! You may, as you suggest, be reading too much into it.

Yeah, between the complete stories told in Bulleteer #1 and Jonah Hex #1, I was left wondering... HOW WILL THIS MAKE A GOOD TPB!?

I worry for the future of DC Comics.

Seriously, those two books were a welcome balm to my wearied mind, which had previously been abused by House Of M #8 and Outsiders #30.

Hex was DC's Conan. The comic that sold big among adults or kids who didn't like superheroes. A guy who had his own moral code and no time for fools. He'd breeze into town, kill people, break things, and stagger out of town.

So what happened in Outsiders #30? Apart from Judd Winick embodying everything bad about comics.

In Outsiders 30, one of the Seven Deadly Sins got loose. Lust then went to town on a prison and there were many jokes about gay sex.

Also, a Lust-possessed Psimon made a pass at Arsenal, whose memorable response was:

"Dude, EVEN IF EVIL DOME-HEADED FREAKS WERE MY SPECIAL KINK, no! Not even if you were the LAST evil dome-headed freak on earth!"