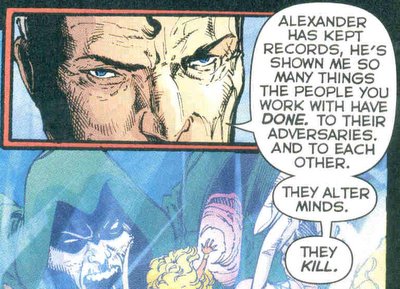 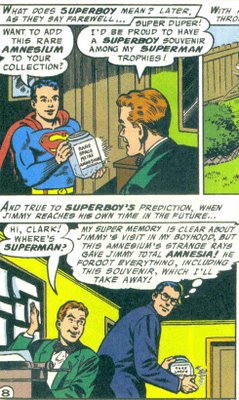 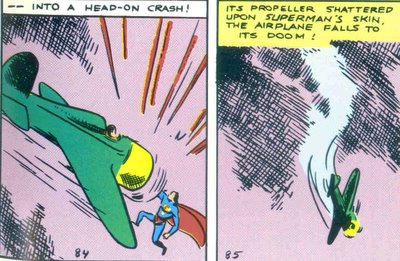 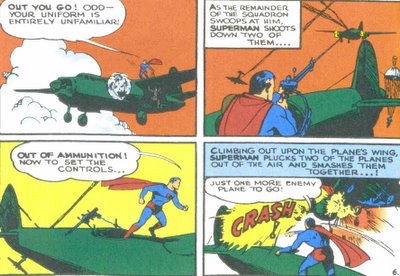 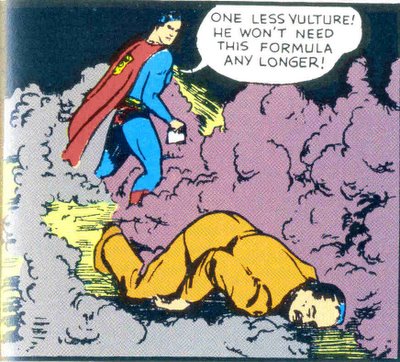 I keep records, too.

You're quite right to point out that the Golden Age Superman was willing to kill, but you can't blame Kal-L for the Amnesium. Remember, the Earth-2 Superman was never a Superboy (nor was [were?] the Earth-Sigma and/or Earth-0 version, last I knew).

Scipio, you magnificent basstard - you read his book!

Thank you Scipio! Exactly what went through my head when I read that!

I believe there are other mind-wiping incidents from old comics (Green Lantern seemed to do it with his ring a lot), but they might all be Silver Age.

Nah, original Green Lantern, from first story on, could and did control crooks' minds.

But don't you see...this makes the story perfect:

"By god, when I was a kid, the youth respected their elders, ate their vegetables, and did what they were told! Not like you ungrateful little bastards today!"

"Proof? You'd believe facts over your own father?"

Self-serving blindness and rank hypocrisy is the right of the aged, consarn it!

It's the circle of life, like in that Elton John "let's all go eat zebras" song, about the circle of something-or-other. Children grow up being lectured about how the previous generation was more moral and upright when it was young. These children reach maturity and produce their own young. The new parents then tell their own kids how kids today are a bunch of lying, heartless ingrates, so unlike themselves when they were young.

Sing it with me! The Cirrrrrcle of Liiiife...

See, now, THAT's the Superman I wish they'd bring back.

Always been my favorite "take" on the character.

And then he could kick the namby pamby peace 'n love Woodstock Nation dropout Earth Two Superman in the crotch a couple of times, and then kill him!