The vote is already HOT and HEAVY in this week's Best Quote Poll. The current leaders are neck and neck...

The Joker: "That's not funny."

Lots of "Big Stuff" happens in comics. But something sobering

enough to make the Joker stop laughing...! The last time I remember the Joker seeming truly sad about his lot in life was right after he shot Sarah Essen-Gordon. Then, as now, he almost seemed to have realized that his "humor" had backfired; he'd gone far enough that even he noticed it wasn't funny. With this quote, the Joker struggles with the fact that though his wildness has made him supreme, it's marginalized him, cutting him out from the biggest event since sliced bread.

Original Superman: "I finally realized -- we saved the 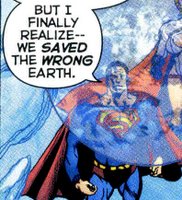 Pardon Superman's misspelling; breaking down dimensional barriers is tiring, so I'm sure he merely mispoke. With this quote, the original Superman -- heck, the original superhero -- condemns the entire post-Crisis DCU and casts himself as possibly the "villain" of the piece. Strong stuff indeed.

Hawkgirl: "Someone in the crowd's been OMACtivated!"

The other two quotes require a 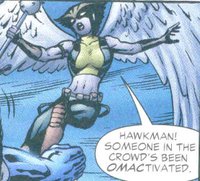 good deal of context to understand, which weakens their stand-alone impact. But anyone who's read any DC comics for the last 6 months has seen a bystander "fin out" into a monocular cyberdrone. If you know what an OMAC is, you get this pun and why it's funny. Hawkgirl's characteristic irreverence and the thrownawayness of the line makes it even funnier ("Duh!" Hawkgirl would say, "What else would you call it?"). Hair-raising quotes are nice, but it's great to have some "comic" in ones comic books, and subtle stuff like this is more enjoyable than broad Plastic-Mannish commentary.

Of course, the eeriness of Beast Boy's quote and the hilarious synopticality of Sardath's quote have kept them in running as well!

Sardath: "As always, we turn to you, Adam Strange, for help."
Come on, people! This quote is the essence of every Adam Strange comic since the invention of four-color printing. The people of Rann call on Adam Strange when they can't open a jar of peanut butter. Or when Sadrath's Zeta-powered peanut butter jar opening ray fails.

I voted for this one largely because of the ironic value of Superman flying off promising "action", only for the comic to promptly switch to a lengthy sequence of "talk" as his Earth-2 counterpart explains the Multiverse and Power Girl's origin for twenty pages...

I'm sorry, not a one of them beats "I feel like road kill" coming off of Animal Man.