Well, as I'm sure you've read about 100 times by now, Aquaman's getting his own live-action television show. I told you we were living in the End Times!

Although it's sparked by the Smallville 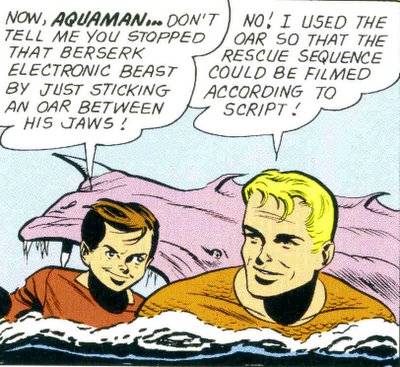 episode with "A.C." Curry, it won't be in direct continuity with it, and the part of Aquaman will be re-cast. Pretty as Alan Ritchson is (and they don't come much prettier, folks), I think the show's producers want someone who can swim and act. Hey, this is the WB: we know how important quality and accuracy are to them! That's why they'll be working in essential features of the Aquaman myth (like his mother disappearing in the Bermuda Triangle) and jettisoning tangential deadweight (like his ability to control sealife). But I digress.

Now, we all know that Jason Lewis is the person who needs to play Aquaman. We figured this out when we were casting "Vibe: The Movie, Meng!". Actually, it was Devon's suggestion, and since Devon erreth not, that's that.

Since they're setting it in Florida, we may not see any of the current supporting cast. But let's pretend, shall we? Let's help the WB get it right by suggesting the REST of the cast of what we'll call "Sub Diego 92101", specifically:


NO SUGGESTIONS YET, PLEASE! We'll be casting them one at time; just put on your thinking caps, and get ready.

Meanwhile, please feel free to contribute what criteria an actor would have to meet in order to play any of these parts or what WB plots you expect to see...
Posted by Scipio at 5:12 PM

The actress playing Morena has to have a phat booty.

I'll play Black Manta and poke that booty with my trident.

Errr, what part of "NO SUGGESTIONS YET, PLEASE!" (note the all caps, the boldface, and the exclamation point in Scipio's post) did we choose to disregard?

No offense, totaltoyz. The Heroclix guys look great. But you are clearly disregarding the explicit directions here...

Ooops, sorry. I actually didn't see that bold text. My error and I do apologize.

Let's face it -- us comic nerds are hard to dampen in our raging enthusiasm!

Here's something worth discussing: Which Aqualad is better? Curly black hair or limp brown?