A Haiku for Your Thoughts

Okay, so, as we've previously discussed, the world is ending. One of the many signs is the Aquaman TV Show, which we are helping to cast. Also, before we all die, I have to complete my Dream Team of Gay Heroclix.

So, why on earth in the midst of all this important stuff are we pausing to hear from, of all people, Joe Coyne, the Penny Plunder? 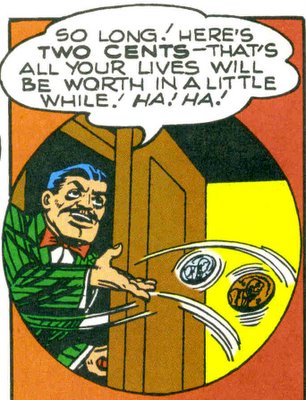 Is Joe Coyne, who is the greatest one-shot Batman villain of all time, making a meta-commentary on the End of the DCU as we know it? "Ha! I'm safe, having been electrocuted 60 years ago, yet memorialized forever by the Giant Penny in the Batcave! Now the rest of you mokes are going to be rubbed out by red skies again, while my Giant Penny remains!"

Whatever he means, it's pretty important since he takes the trouble to say it ... in haiku.


What haiku can you compose to explain Joe's taunts, comfort us during the End Times, or link Joe to the events of Infinite Crisis in a crossover?

One of my pennies
is a silver dollar? Damn!
Go to Hell Two-Face!

Always messing with
my coins when he gets so much
more airtime than me.

One copper penny
One of bright flashing silver
Joe Coyne says what the f-?

Joe Coyne is preserved
But continuity is
Harsher to Bat-mite