To honor my friend Brad Meltzer, who's going to be writing JLA when it starts up again, I wanted to examine the Silver Age JLA a bit. Now, Brad's a child of the JLA's "Satellite Era", which is part of the Bronze Age, and I'm sure that's the era whose feel he'll want to evoke. NOT the Silver Age, but the Bronze Age.

I get ticked when people lump the Silver Age and the Bronze Age together indiscriminately: you know, "the Pre-Crisis DCU". Sigh. While there are similarities and connections through continuity, there is a difference between those two ages, certainly where the JLA is concerned.

To help those who haven't steeped themselves in the idiocy of the Silver Age, I'm going to start a little seminar I call

TOP TEN CLUES YOU ARE IN A SILVER AGE JUSTICE LEAGUE STORY.

1. You're fighting inanimate objects that aren't particularly inanimate. You are experiencing the Silver JLA phenomenon of: Notsoinanimation.

But in the Silver Age JLA, you're just as likely to be enmeshed in a life and death struggle against an hourglass, the Sphinx, or an enraged 1099 Tax Form.

Here, Batman and Green Arrow are being eaten by a giant pearl that escaped from a flying necklace. I bet after that little incident, Bruce's therapist got some big bucks in extra sessions. "You can get free, Mister Wayne -- but only if you free yourself from guilt." 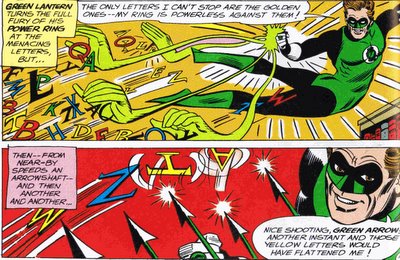 Above, Green Lantern relives the horror of flunking 5th grade Reading (again) in his struggle against an incomprehensible jumble of letters. He rejects literacy with the help of his fellow anti-intellectual, Green Arrow. Ladies and gentlemen, Dumb and Dumber of the superhero set. Like Marvel readers, they mostly just look at the pictures.

Here's poor Batman again, who could combat 30 ninjas but is about to be knocked senseless by the numerals from a clockface. Kind of like when his therapist says, "I think the pearls may symbolize your-- Oh, I'm sorry, Mister Wayne -- your hour's up. Please leave the check on the mantle as you leave." 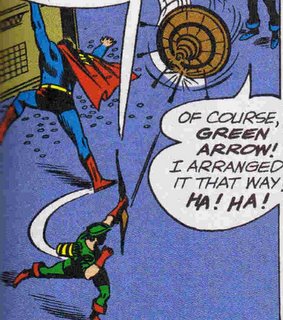 Oh, and here's Green Arrow, being thwarted by a living roulette wheel (his fortunes do come and go!), while sure-bet Superman stumbles into unconsciousness, having been overcome by poker chips. Yes, really.

I don't know kind of pipeline Julie Schwartz had back in the day, but his writers were getting some serious stash, and none of it stepped on, I'll wager. It also explains why books were never late back in day. No finals, no fix.

There are hundreds of other examples. I bet you've started to recall some already! So, always remember,

Notsoinanimation =
Silver Age JLA.
Posted by Scipio at 7:18 AM

I don't see why DC isn't having YOU write Justice League. If there's one thing comics need more of today, it's clocks that shoot deadly numbers.

Yikes--I'm being attacked by a word verification!

Here's an exmaple of a recurring theme in Silver-Age JLA stories: New "Old" Enemies of Aquaman!

In several Silver-Age JLA stories, the League found themselves in combat with a group of villains made up of one old enemy of every member, or at least every member participating in that story. Aquaman had such a sucky rogues gallery in those days, no fewer than three times did they have to invent a brand new villain and call him an "old enemy" of Aquaman! This happened in JLA #'s 14 (The Sea Thief), 35 (Dagon), and 61 (Cutlass Charlie).

This is a fine public service you are providing, Scipio. I also get annoyed when people divide DC's timeline into "Silver Age" and "post-Crisis". It makes no sense to me. The stories from the 70s were much more like the stories in the post-Crisis era than they were like the Silver Age stories. It also makes confused people think that Lois Lane acted like a whiny brat right up until the Byrne revamp, when Superman had already been through at least two revamps in the 70s to bring him more into line with "modern" superheroes (the Byrne revamp just got the best press).

I vastly prefer most Bronze Age characters to their Silver Age counterparts, Batman in particular.

What the hell happened to Hal's spine? Must be all that head-trauma..

Hooray for the distinction!

As much a fan of the JLA as I am, I never really liked the Silver-Age stuff all that much. I've warmed up a little to its charms, btu it has nothing on the GL, Flash, and Superman of the same time frame. Sekowski's art does not help.

So, are we going to see the 10 clues that you are reading a Bronze Age JLA story? Such as:
1) Red Tornado seemingly dies (again)
2) The male mambers of the cast get collagen lip injections
3) The Phantom Stranger walks around like he GODDAMN OWNS THE PLACE.

That said. Dear GOD but I love the Silver Age JLA, most 'specially the last twenty or thirty Fox/Sekowsky issues. (Post Showcase Volume, sadly.) Sure, the art's a tad wonky. (Although I think the Sekowsky COVERS for this run are very, very good.) Sure the characters have no seperate personalities and don't engage in Stan Lee style soap operatic hand-wringing.

But in therms of pure, free-reigining conceptual imagination, there's no superhero comics that can touch 'em. Ever.

Sorry, Scipio. I didn't think anyone but me remembered that!

I think, at DC, the Silver Age ended in 1969. So many changes that year! Wonder Woman and J'Onn J'Onzz left the JLA; Wonder Woman and Green Arrow drastically changed costumes and outlooks (WW's didn't stick); Dick Grayson left for college and Batman became a solo operator with the new penthouse apartment and Batcave in the basement of the Wayne Foundation; the JLA's new satellite headquarters; et cetera!

Looking forward to the other nine clues. But first - some comments on those four images...

1) So GA had an Arrow plane! Which, strangely, is yellow and not green! Why doesn't he use that any more? And does he have an Arrowmobile, Arrowcave and an Arrowsignal as well?
2) In the GL picture, one of the letters that Hal's ring failed to stop is blue not yellow. Is the ring vulnerable to the letter Z as well?
3) "My time numerals will shock you senseless if they touch you". I bet he's just saying that. They're actually harmless.
4) Why is GA firing at the roulette wheel and not the villain?

(Best - and most apt - word verification thingy yet: batgit. It must have something against the caped-crusader)

1. When Green Arrow accidently killed someone during the Denny O'Neil, he had an "Arrowette" crisis: "My god I use deadly weapons to fight crime and someone actually got hurt!" So he quit being Green Arrow, intentionally wrecked the plane into a mountainside, then studied archery at a nearby monastery. That's where, I assume, he fathered Connor (only Ollie could father somebody at a friggin' monastery). Weird guy.

YES, he had an Arrowcar and a Flaming Green Arrow Signal in the sky. And a cave. He revisited the Arrowcave during the Meltzer run.

2. Hal is easily confused by letters.

3. They weren't harmless, but the only point was to make Batman back up into something else.

4. He's firing at the villain but the roulette wheel keeps blocking him.

YES, he had an Arrowcar and a Flaming Green Arrow Signal in the sky. And a cave.

"Good Lord, man, didn't you ever have an original thought back then?" Batman to Green Arrow, during Kevin Smith run

"Good Lord, man, didn't you ever have an original thought back then?"

By a wide margin, that's the best line of that entire run. Green Arrow is the whiniest Batman parody ever. Which is pretty bad, considering he existed in a world with an international League of Batmen. You'd think, like, the British Batman would be a bit of a bitch, but Ollie takes the cake.

Phantom Stranger does in fact own the god damn place.

He's the Phatom Stranger after all.

First story in the GA Showcase. Each one has his own "ethnically correct" arrows and Arrowcar.

Oh my Jesus. It must be a sad day when you decide to be a knock-off of a knock-off.

What the hell happened to Hal's spine?

Hal's just heard that he has a great butt and wants to see for himself.

Are... are they magic poker chips?

But there is a magic spell involved Superman touching rubber.

Since nobody's offered a counter explanation, I will.

Yes, the style of DC's books drastically changed in 1969 or so. But the continuity itself continued on. "Relevance" changed how DC told stories, particularly Green Arrow. It did not, however, restart continuity.

"Pre-Crisis" isn't a reference to quality or style. It just identifies that the Flash who died in Crisis was the same Flash that began in 1956.

That said, there is a difference between "Pre-Crisis" and "Silver Age." Definitely, these are not interchangable. In fact, "pre-Crisis" refers to EVERYTHING before 1985-6. The Golden Age and Silver Age continuities were joined into a single continuity beginning with Flash 123. From that point forward, the GA was a matter of the present not the past, thanks to the multiple universe concept.

So I agree that we should not lump 70s and 60s DC together too quickly when discussing quality and style. But as for continuity, yeah they're the same.