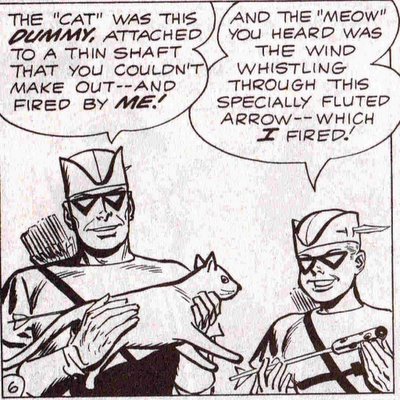 Attached to a thin
shaft that you couldn't make out
and fired by me.

Dang! Nice one, Ollie.
Speedy, however, isn't as swift as his name implies, and his attempted haiku falls one syllable short:

The wind whistling through
this specially fluted arrow
which I fired.

Nice nature image, though. Or maybe I'm being unfair, and Roy pronounced it "fire-red", which is either classy and Elizabethan or it's embarrassingly hillbilly.

In either case, please help Roy out by composing a better haiku about his Meow Arrow or the situation as a whole.
Posted by Scipio at 1:49 PM

"A thin shaft which you couldn't make out?" I feel sorry for Black Canary!

You have mouse problems?
Then you need my patented
Plastic Cat Arrow.

This shaft is so small
That you can't see it. Why are
you giggling, Dinah?

"It's simple, Speedy.
Put the shaft in the pussy.
Then, fire at will!"

Speedy doesn't have
time for haiku - These arrows
will not flute themselves!

Mike Grell's uber-violent Longbow Hunters would have been a hundred times better if he used the "Plastic Cat with Meow Arrow" just once.

What would I do without my daily doses of The Absorbascon?

Ollie:
Funny isn't it?
Time wasted on trick arrows,
make with the pointy.

Roy:
Huh? Must be on the
nod again. All due to my
heroin arrow.

Ollie:
What? My sidekick's a
junkie? Oh yeah, covered this
a long time ago.