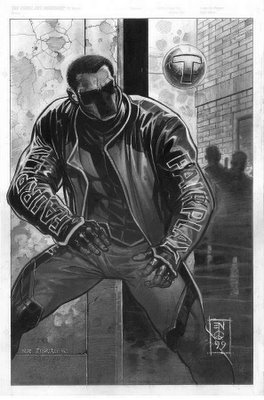 Have I ever mentioned how much I love Mister Terrific (both of them)? Anybody whose origin is "Attempted Suicide Because I'm Too Cool to Live" is alright by me, jack.

Like a lot of more intellectual heroes, Michael "Mr. Terrific" Holt doesn't translate perfectly to a Heroclix. Oh, his dials are accurate and all, but something is missing. What is it? Oh, yes. T-Spheres.

Consistent with their use in the comic books, the T Spheres have no attack capabilities. Primarily they augment the defense of Mr. Terrific and his allies. As Mr. Terrific uses the spheres to "mask his presence", each has Stealth and Smoke Cloud to protect themselves and nearby allies. Similarly, the JSA Team Ability allows them to share their defense value with adjacent JSAers, so Michael can help protect his colleagues (or, using the Veteran T-Sphere's "Defend", he can protect non-JSAers, too).

The "Rookie T-Sphere", with all these basics, costs 4 points. The 7-point Experienced T-Sphere adds the specialty of "Supersenses" making it harder to hit. The 10-point Veteran gives that up for Defend, potentially "taking one for the team". But while it lasts it has the added advantage of the Police Team Ability, which augments the attack of adjacent allies. A combination of several T-spheres, used effectively, can do wonders to improve any JSA team.

Enjoy and remember -- Play Fair!
Posted by Scipio at 9:50 PM

My gawd... this is absolutely freakin' brilliant!

Thanks, k26! No one knows clix better than you!

Please feel free to share these with anyone else. I can send you the file if you write me.

I echo K -- brilliant stuff. This and the GL batteries just got posted to my blog. Great great stuff, and real game enhancers, too.

You might be interested, or might not, in taking a gander at my House Rules. They're at www.angelfire.com/ny3/docnebula/hchr.html . They're designed to make the game as much like comic book combat as possible, and I won't play under any other rules, which means, in general, I don't play much, except against my girlfriend's kids, whom I have brainwashed.

Still, as soon as I can get pogs of the GL Batteries and T-spheres printed out, we'll be using them.

I forgot to mention: Mr. Terrific should not be able to use a T-Sphere of higher rank than he.

I'm really these are well received!

Keep an eye for my pogs for:
Booster Gold's pal, Skeet:
Riddles for the Riddler
Aquaman's Finny Friends;
and more!

My name is Grey Williamson and not only did I design the image of the Michael Holt Character, but I created the "T" spheres.
And just for your reference... they did have limited attack capabilities.

There were a series of associated items that were also included in the design along with schematics for the functionality of the spheres. DC Comics would only pay a pin-up rate and not a design fee for rather ridiculous reasons, so I never gave them the remainder of the design work.
They published the original image, took the spheres... and incorporated sketches that were included without the jacket(including the tattoo) into their later design.
They then paid another artist the design fee.

Just recently they took my illustration off their page for what is probably liability issues.
This whole thing resurfaced because I was sought out recently by a few different bloggers... maybe because of Holt's appearance on The Flash TV show.

What will be, will be...
I'm glad at least that it was received well and brought someone a little joy.