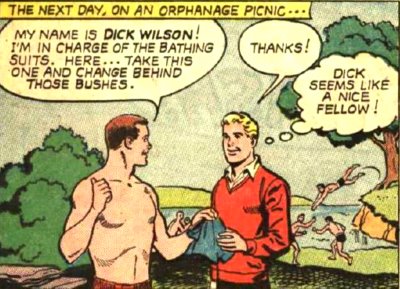 Dick treats me right, I
like a man who shares his clothes
and gives out bushes.

My name is Dick Wilson!
I'm in charge of the bathing suits...
Here, take this one!

OK, it's not perfect, but what do you expect from poor, undereducated orphans?

He took a flying leap and is about to tackle that other dude.

"I'm in charge of the bathing suits"? I so want to put that on my resume.

Take this one and change behind the bushes...I'll come join you in a second.

Oh those wacky orphans on a weekend trip to Provincetown!

I think I need to increase the use of the word "fellow" in my daily vocabulary.

It gets so little use.

"Thanks for the swim trunks!"
Dick seems like a nice fellow
...His suit gave me crabs.

Did anyone have nipples in the silver age?

I didn't. I only got mine in the late eighties.

Where, pray tell, did you find this? It's a SCREAM!

It was a gift from an Absorbascommenters, "Mike S.".

It's from an old Supergirl story.

Hey, Mike S. here. This panel is from the Supergirl story in Action #332, which is one of those nutty imaginary stories. "What If" Supergirl arrived on Earth first and Superboy was dumped of at the Midvale orphanage? The sweater boy is Kal-El in a blonde wig!

Knowing that Dick is talking to the future Superman makes this even creepier.

(And I can't believe the word verification expect a character with an umlaut. Oh the humanity!)