Eight Fabulous Things I Learned from 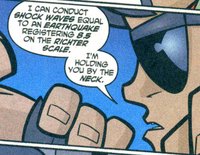 He makes me shake even WITHOUT using his power. Not that I'm complaining, mind you!

2. In Animated DCU Spanish, "el" is used instead "los"; fascinating! 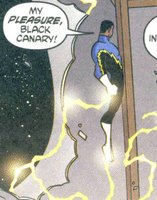 It's so very "Static Shock"; will this change come to the DCU proper? I hope the decent costume comes with it.

Like fashion-forward Stargirl Black Lightning doesn't need a midriff-baring costume any more; those are so yesterday.

He also says really cool stuff, like "Squash that!" That is so street. I'm going to start saying that ... in a loving and supportive way, of course, just like Vibe.

But you can still tell

they're rough and tumble gangmembers because, you know, the shirts are not tucked in.

while kicking tail.
It simply don't get no cooler than that, folks. 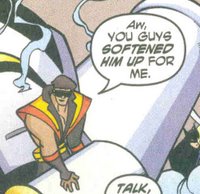 This, despite having enough power to have sunk Sub Diego single-handedly. Ye gods, has there ever been a more inspiring role model? I think not.

All children should own a Vibe action figure. And the government should pay for it.

Observe how he towers over that policeman; how Vibe's bicep is larger than his head. I've never thought of Paco as being huge; now I can hardly think of anything else.

Vibe used to be a tiny man. Now he's Superman size; Martian Manhunter size. It's almost as if ... as if when you come back from the dead, you become larger than life. Funny how that works.

I am so happy for you that Vibe is getting some non-DCU attention.

And that he's so huge! I don't know why. Just vibe. And huge.

A friend of mine was telling me about her big vibe, but that was months before this issue came out. She must have gotten a review copy or something, but she certainly seemed as excited about it as you folks are.

Verification Word: Sggotjh...sounds like something out of a Lovecraft book.

I think they wrote this issue just for you, Scipio.

I hate being the new guy who is forced to ask the dumb obvious questions, but...

a) like Vibe, because he's a ridiculous, campy absurd figure who makes us laugh?

b) hate Vibe, because he's an annoying, contrived stereotype that makes us cringe?

I mean, is everyone else (not Scipio) totally clear on this issue? Because it's not clear to me at all. And from the comments I read, I'm not sure it's clear to the rest of you either...

Could someone please clue me in so that I can hang out with the cool kids?

I think prevailing attitudes have Vibe as one of those goofy, near-guilty ironic pleasures, like Bangles music.

The first panel has Vibe claiming he can cause a earthquake measuring 8.5 on the Richter scale. How does he know this? Has he created an 8.5 earthquake before? Where?

And for a guy who brags about the size of his earthquakes, Vibe is no seismologist. A real earthquake-creating seismologist would talk of his quakes on the intensity scale, which measures the strength of an earthquake, not the magniturde of the energy released.

Sorry, Scipio, but I think Vibe's just a big poseur.

Not only do the gangsters not tuck their shirts in, they have huge diagonal creases in them! Holy ironing faux pas!

"Could someone please clue me in so that I can hang out with the cool kids?"

Vibe's real power is his ability to generate intense levels of pure camp. Vibe is Kitschiest One There Is!

No way, those aren't ironing creases - they're those origami toilet-paper foldovers that maids leave in hotel bathrooms!

You ever get the idea that he really likes The Vibe?

Man, where can I learn to fight like Vibe? That "behold the power of my inverted crotch" move Scipio posted is badass.

The only other breakdance-fighting I can remember was in Zoolander. Vibe definately takes the whole idea to another level.

Does he carry a piece of cardboard with him, so he can bust a move wherever he goes? I've always wondered.

That Black Lightning costume looks like one of Lightning Lads suits.

"The only other breakdance-fighting I can remember was in Zoolander."