I knew this already; I believe I actually posted about it before: Buddy Baker still lives in San Diego. You know, the dry place adjacent to Sub Diego. They use to have a zoo. 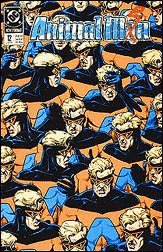 Anyway, I assume that Buddy will still exist after IC is over. The man's a literary cockroach; he'll survive.

Aquaman can use some extended 'family'; Buddy's got nothing else to do (superhero-wise). Buddy's just as useful underwater as any fish; I recall he once defeated a Thaganarian warrior that way, during "Invasion". He wouldn't be able to talk, I guess, but if anybody could carry off a silent partner role without being diminished by it, it would be Buddy..

He could help bridge the divide between the Sub and San Diegos, help us learn about marine life, and, face it, Aquaman could use the comic relief.

DC, give us Animal Man as part of Aquaman's 'extended dynasty'!
Posted by Scipio at 6:56 PM

Actually, he could talk. I remember a Animal Man issue that he partner up with Dolphin (heh, how is that for Seven Degrees of Aquaman?) and if I remember correctly he uses the same method aquamans use when not using telepathy.

He also spoke to Aquaman telepathically in JLA: Year One. I would imagine that when he mimics fish he is able to communicate with the King of the Seas as other fish do.

And the orange costume would allow him to fit in very well.

Animal Man is FAR too intriguing a character --- both in his unexplored power potential and as hero and family man --- to be some stupid sidekick, limited to water. That's as limited an idea as saying Green Lantern would best be Green Arrow's sidekick, making him shiny arrows of green willpower. One of your few bad suggestions, in my opinion.

Hey, no need for either of them to be limited to water... and Buddy makes a great partner for landside adventures as well.

Anyway, I assume that Buddy will still exist after IC is over.
Given that the first page of IC#2 is a "We love you Daddy!" scene with Animal Man and his family, I wouldn't be so sure of that.

I really don't have enough confidence in Geoff Johns to avoid that particular cliche. I think Animal Man's time is up. :/

I agree with Kelvin. That scene was so sweetly nauseating that it immediately went up as a red flag for me.

Y'know, I like Geoff Johns writing, but I'm with Kelvin here. He really won't be ale to resist that cliche.

And Buddy was in the Giffen-Era League.

He'll get a heroic out, I'm sure. As long as he doesn't die saving Supergirl, I'll remember him fondly.

Even if Buddy bites it in IC, Morrison will just bring him back afterwards. Hell, he did it for his family, why not him?

And Morrison does feature the Cauldron of Annwn in Seven Soldiers. That relic exists to bring the dead back to life. As soon as he's done with that storyline (about the time IC ends), watch that particular artifact end up in the DCU Proper, giving writers free reign to bring back anyone they want.

Let's hear it for Grant Morrison!