Thought from Infinite Crisis #2, pages 2 and 3.

1. I know how you feel, Animal Man; Troia makes me want to throw 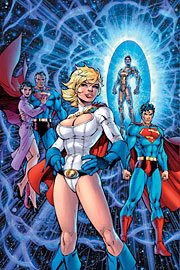 3. So, "Supergirl", there's no word for 'escape' in Kryptonese? Perhaps that's why no one "escaped" the explosion, huh? That's the kind of idiotic, poorly thought out flourish I'd expect from Marv Wolfman, not Geoff Johns; Marv, give Geoff the pen back! What Supergirl has claimed is pretty much linguistically impossible. "Escape" isn't an obscure concept; any culture whose members face any danger has the concept, and so, will have some word to denominate it. If nothing else, they have a word for "exit" or "get out" or "evade" or "avoid".

So either the writers are being really stupid here or Supergirl is. My money's on Supergirl. I'm kind of hoping the preservation of the universe (or multiverse or whatever) winds up depending on Power Girl dismembering and consuming all of Supergirl so as to subsume her place in reality. No "escape" for Supergirl!
Posted by Scipio at 8:30 AM

2. I'm not willing to give Johns that much credit here. I think he wrote that line to make Supergirl sound more "badass." "Whoa, dude, Supergirl's so tough, she doesn't even know how to say 'escape'! Dude!"

2) Yes, the conceptual semantics of "center" don't apply when talking about a unidimensional point mass. (Of course, they still use the balloon analogy, which does have a center, just not "in" the universe proper.)

But even giving it as pass as one of those quaint Silver Age scientificky bits, the DCU is not our expanding point mass. They had a big hand, the Monitor and Anti-Monitor, and Krona, the last three of which share locations with Oa. If they want to claim that the first one also "started" at Oa, well, they have reason. (If the "Center of the Universe" isn't Oa, then not only is Johns scientifically ignorant, he is also a Bad Fanboy.)

2b) Hasn't Johns been consistantly "upgrading" star systems to galaxies and galaxies to "universes" throughout the lead up to InC? The center of the galaxy is someplace I would really like to have Troia and Firestorm. (Why Animal Man would ever go into cold, sterile space is a Deus Ex Machina of the highest order.)

3) You are right, that is not the kind of idiotic, poorly thought out flourish that we should expect from Johns. Nobody died to make his point. (Yet.) How can we understand just how important it is that there is no word for "Escape" in Supergirl's language if we don't flay Streaky alive, on panel, to emphasize just how kewl that concept is, anyway?

1) Donna Troy just makes me dry heave anymore. I msut be getting soft. Of course, this will change when she gets in close proximity to the Green Lanterns and a) comes onto Kyle, b) starts ragging on Hal (Fresh off of mind-control herself! She's such a hypocrite!), or c) Claims to know more about the nature of the multiverse than they do. I'm sorry, Kyle was omniscient recently, and the Lanterns all remembered the whole mess for a long time after Crisis -- Hell, the Guardians caused the whole firkin' mess! Kilowog should be able to tell Donna, even new improved Harbinger Donna (Who only worked for the Evil twin of the Multiverse's Greatest Voyeur, not for the guys who caused the whole mess and spent their lives trying to make up for it), a thing or two about the nature of the multiverse!
(Oh, and if it's D -- All of the Above. She Must Die.)


2) Maybe Center is a mistranslation for an Oan word that means something different, like "Point where all willpower is pooled and channeled into the power battery" or something.

Of course, maybwe we should give this one a pass, as the laws of Physics clearly do not operate the same way in the DC Universe. Especially when connecting with Human biology. The DCU did not start with Big Bang, so much as a villain (who's identity varies, depending upon the crossover) whimpering "I could have shaped it all the way I wanted... if not for you medddling heroes!" I mean, if the heroes can physically travel to the space

2B) I'm willing to go so far as to blame this on the Cosmic Closet Cleaning going on right now. Polaris gets its own galaxy. Okay. Why not? The Guardians did say sectors were being realigned. Johns wrote in his own excuse for lack of astronomy knowledge! (And Oa got upgraded to the Center of the Universe a long time ago)

3) I'm willing to give him this much credit. Supergirl has seemed remarkably stupid to me since her re-introduction by Loeb. Johns is just continuing the established characterization. Although it was pretty neat to learn she talks to herself in Kryptonese. Wonder if she answers herself.

Must just be more forgiving than you guys.

I'm reminded of The Tick.

"Surrender? HA! I don't know the meaning of the word! I mean, I do know what the word means, I'm not stupid. Just that I don't think it applies in this context."

Once again, a crazy and over-muscled man in a blue bodysuit and mask shows us the way.

And this time, it's not The Batman! Weird.

Yeah, I'm "covering" for the mistake by assuming it's the, ahem, "power center" of the universe.

But frankly I feel this scientific ignorance has gone on long enough. Writers can't figure out the difference between "a vibrational plane" and an actual higher dimension? Why not? Their readers can.

If you're going to write science fiction than you have to know some science. I love Geoff Johns, but I'm embarrassed that he seems to have COMPLETELY missed the basic premises that underpin the idea of the 5th (or Nth) dimension. "They've retreated from the 5th dimension into the 6th dimension!"; I mean, what the fo, Geoff!

I can believe a man can fly. That merely requires accepting some "otherscience", not denying gravity. But please don't require me to ignore some of the most basic mathematical and physical truths of reality, particularly without establishing a sensible replacement.

2: Faster-than-Light travel is possible, even commonplace, in the DC universe. Thus, relativity cannot stand. So there may well be a center of the universe.

3. There's a third possibility. Maybe it's a slip. She doesn't say there's no such word in Kryptonese, she says there's no such word in her language. She may yet be a fake Supergirl, and I vaguely recall somewhere in the back of my head from some Mister Miracle nonsense that there isn't supposed to be a word for 'escape' in Apocalyptan...

Oh, and 1) even if Troia in general didn't make one heave, when she stands in front of an actual starfield and her costume turns her into disembodied floating cleavage...yeah, hurl time.

I just assumed it meant centre in a symbolic sense as in (from my dictionary): Geneva was then the centre of the international world.

Obviously, I meant 'center' as you Americans demand.

Come back Cir-El! The world needs you to stomp this pretender! It's not like she can run away, she doesn't have a word for it!

Scipio -- Fair enough. Why don't you go to Geoff Johns' message boards and bring this to his attention? He'll probably explain it away in some future Green Lantern story, I mean, he felt a need to explain away gray hair, this is considerably bigger.

In a cosmology where one of The Hero Who Runs Faster Than Light's main foes is a guy who throws boomerangs, nitpicking about "the center of the universe" seems kind of absurd.

I find the simple scientific principle of "comic book physics" explains everything.

Kyrptonians are a bunch of fatalistic losers apparently. It does make the whole "sole survivor even though there was adequate warning" thing slightly less implausible.