Today, let's talk about one of Lois Lane's former roommates. Do I mean marvelous Marsha Mallow, one of our Absorbafaves? 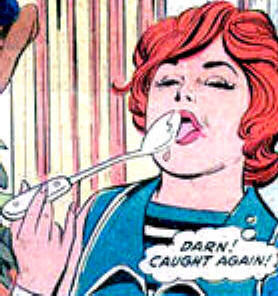 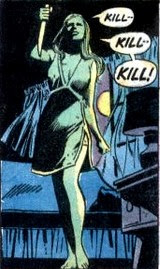 NO! The chick I mean is EVEN GROOVIER.

Once upon a time (Lois Lane 120), Lois Lane's sister got involved with the sinister crime cartel called the 100, then was (apparently) killed in South America. This led to exactly what you'd expect: Lois tied to a giant bull's-eye while a pack of Frito Banditos aim their darts at her nether regions. I just hate it when that happens! 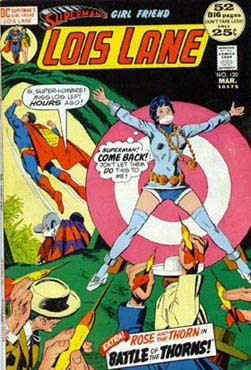 Sometimes, to paraphrase Freud, a dart is just a dart.
This is not one of those times.

Anyway, the whole adventure wrecks Lois's composure and she goes missing for a month and winds up wandering the streets of what in Metropolis passes as the bad part of town (meaning that the sidewalk ice cream vendors there don't carry sprinkles).

Lois is (of course) mugged and who comes her aid? No, not Superman! 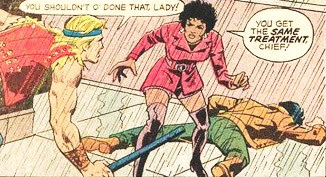 Marsha and Kristen got last names when they exercised their power of introposition. But when Julie met Lois, she was too busy kicking tail to introposition herself.

But if the fat roommate is Marsha Mallow and the knife-wielding roommate is Kristen Cutler, it's pretty clear that this story, despite Bronze Age political sensibilities, still has Silver Age naming conventions. Thus, the sassy black roommate must be named Julie Jively.

In fact, I bet at the apartment they even stand around in alphabetical order: Julie Jively, Kristen Cutler, Lois Lane, and Marsha Mallow. Thank Schwartz the apartment wasn't any bigger or we'd be dealing with a French stewardess named No-No Nanette.

Not only does Julie Jively wear matching purple belt, hot pants, and hip boots (all leather, I assume) while kicking tail, but she also sasses you while doing it. 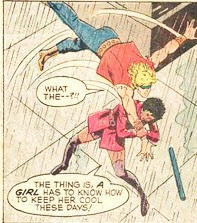 Oh, but remember, folks (and Batwoman), there's a price to pay for fighting crime in heels: 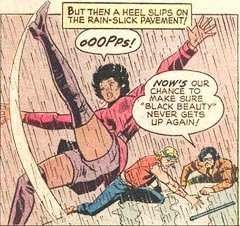 Fabulous high-kick, though. She could be one of the Metropolis Rockettes!


Don't worry, kids! Seeing Julie Jively in danger, Lois Lane comes to her senses and beats the muggers senseless with some garbage can lids. Welcome back, Lo-Lo! A standard Lois versus Evil Landlord Scheme follows, but the important part is this: 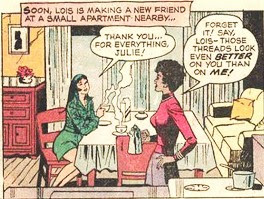 Yep. All those famously hip outfits Lois wore in the 1970s? The boots, the bangles, the beads? The minis, the micros, the midriffs? The headbands, the hot pants, the hip-huggers?

They belonged to JULIE JIVELY.


Julie Jiveley was a no-nonsense chick who talked turkey. 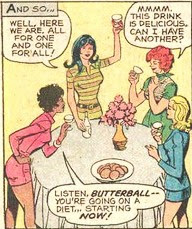 Butterball turkey, in fact.
P.S. Ladies, please get back in alphabetical order!

Julie Jively calls a woman she met that day and is planning on living with "Butterball", and starts controlling her life almost immediately. In comic books, this sort of behavior is the beginning of a beautiful friendship. In our world, it's the beginning of Stockholm Syndrome.

She's hip, she's sassy, she's a major busybody; how could she get any better? Why, she's well-educated and sultry, too!

It's the middle of the night, and you've awakened just in time to disarm your knife-wielding psycho of a roommate before she ventilates the orange Naugahyde sofa. Do you have the presence of mind to make a sassy Shakespearean reference? Julie Jively does. 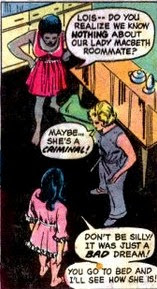 Damn it, ladies, you're standing out of order again!

Not only is witty Julie Jively a Friend of the Bard, she's sultry. How do we know this? Just look, for pity's sake:

Convinced yet? I've got one more try to help you understand the grooviness that is Julie Jively.

The scene is a crowded Metropolis lecture hall. Metropolitans, remember, get attacked by Brainiac or giant gorillas every other week, so they can get a little edgy. Earlier that day, an escalator had malfunctioned, so the crowd's pretty tense already. Suddenly, the lights in the auditorium go out. What does any sensible resident of Metropolis do?

ASSUME IT'S A BOMB AND PANIC!

Keeping her cool (something a girl has to know how to do these days), Julie Jively immediately leaps onto the stage and leads her roommates in 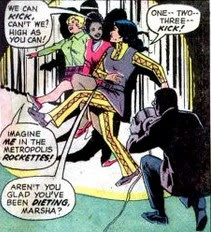 Ah, I knew those high kicks of hers would come in handy some day! But the ladies are STILL out of order; what the heck is this, JLA #7?
Posted by Scipio at 7:37 PM

How is the hippie thug not falling over in that first panel? It's like he's already put his body in the first stages of a judo throw, by sheer willpower. I guess that's just how groovy and krunk and the cat's pajamas Julie Jively is!

Also: trash-talking and micromanaging the life of a roommate on the first day? I've seen enough episodes of "America's Next Top Model" that I don't find that strange in the least.

1) Hang on. If they added No-No Nanette too, they might've never had to collapse the books into "Superman Family."

2) This page:
http://supermanica.info/wiki/index.php/Julie_Spence
takes the wind out of my sales, too. "Jively" is way better.

Dang: I at least expected "Jefferson".

Jively was her mother's maiden name, I'm sure.

Or her married name. Perhaps she married "Jefferson Jively".

In the 60th anniversary issue of Action Comics, Lois takes out a thug with a high kick she claims she learned from a Las Vegas showgirl. I guess now we know the truth.

You wonder why there were no "how to do judo with Julie Jively" pages a la Black Cat comics.

"Ethel Mertz: Prisoner of Cellblock H" sleepwear. Made me crack up. Thank you.

I still like Melba better. And Marsha's not fat, she's curvy! Why is she wearing a yellow wig in that last panel?

That panel with her licking the spoon is SEX-AY!!!

I'm an idiot. English isn't my native tongue, so at first I thought the girl's actual name was "Even Groovier".

I mean, in the Silver Age anything was possible.

So, Misty Knight lived in Metropolis before she shacked up with Danny Rand?

Nacho, you're not an idiot, you're just the "uncomprehended poet" the song speaks about! However, you do need to adjust the prescrition on your glasses, since you missed the size 20 purple sign that said "JULIE JIVELY!"