GOD that hand is beautiful! 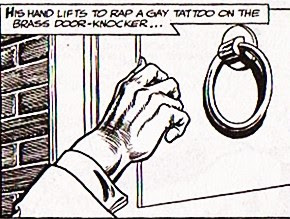 Hal Jordan is opportunity.
Posted by Scipio at 9:54 AM

I've never encountered the phrase "rap a gay tattoo" before: the image which first sprang to mind was Jay-Z and Hervé Villechaize performing a love-duet...

Heh. That's even funnier than Clark wanting to take Lois to "some gay place"...


...although not as funny as Captain America and Bucky:

Cap: "Yessir, Bucky m'lad, this outfit was the rage in the Gay Nineties."

Bucky: "This one must have been the outrage of those gay days!"

The hand's ok, but the wrist is oddly swollen. Too much gay rapping I suppose.

Just wanted you to know, that I have been so inspired by your 'Reasons to love Starman' posts that I have put together a radio drama style mp3 staring him.