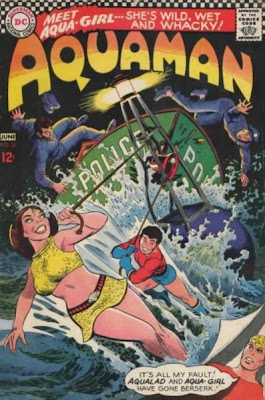 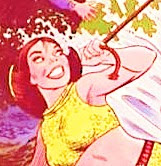 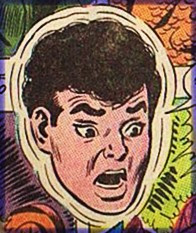 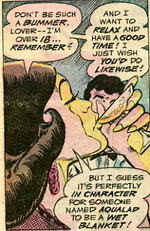 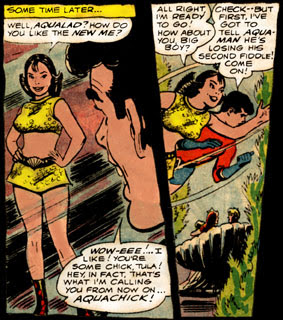 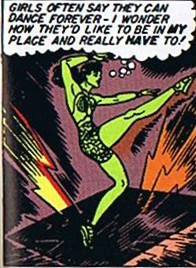 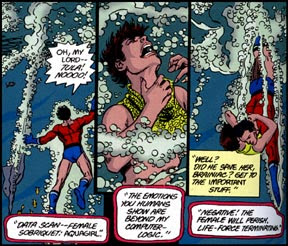 Earth-4 is totally worth saving. Now more than ever!

Thank you, selfless Tula! Perhaps one day, a metamorphized alien trapped in a caterpillar's body will eat the moment that you were...nevermind, I'm still not sure how that works.

I never expected the grooviest super-chick of them all to appear this early in the month. Tula Lives!

Nor did I expect to ever have a longing to read a Tula/Melba Manton team-up tale. Now I do. And I want Tula to have wear one of Melba's outfits in the process.

Maybe Tula's not dead any more...

Wouldn't THAT be an interesting turn of events for Aqualad?

I think Nick Cardy may have been thinking very hard about Yvonne Craig (TV's Batgirl) when he designed Tula. She has the pixie face and Ms. Craig's curviness, all right. You're a bad boy, Nick! You get the strap! (Because Tula is PLEASED.)

I'd love to resurrect Aquachick. I'll bet she dances a super-mean Swim. And, of course, she probably IS alive out there somewhere in the multiversal array.

So many groovy folk to bring back...

That would give the Tempest story the kick in the pants it so direly needs.

Count me on the bandwagon of people who'd be happy campers to see Tula return.

I haven't read the final 3 issues of 52 yet Scipio. I'm trying to free time to get to the shop tomorrow and pick up the last two issues.

Somehow, someway... if Tad brings back Aquachick, Nick Cardy should pencil that issue.

I loved DC's silver age teen heroines. Wonder Girl was similarly groovy until Marv Wolfman decided to give her "depth."

Now that I think about it, he offed Aquagirl too.

I laughed way, way harder at "piscoteque" than I probably should have. There's a word that has seen exactly all the mileage it ever will, right there.

Of course he did. Bob Haney was the Groovitor; Marv Wolfman is the Anti-Groovitor.

Thank you, Jon. I knew that, even if only one person got that, it would be worth it.

"I think Nick Cardy may have been thinking very hard about Yvonne Craig (TV's Batgirl) when he designed Tula."

Ah, Cardy gets a pass on this one, Tad.

So the purple-eyed freak is chatting up some surfer girl and, all of sudden, there's Tula, not dead any longer and... WHACK!

In the grand scheme of things, killing Tula seemed kind of pointless, but not in a sublime, choked to death by a robotic hand kind of way, just something to do. Her suit was cool because it's just like she fought evil in her party clothes.

New Earth is all about brining DC back to brighter days, at least, that was what I was told. So bring back that shining light of the murky depths.

What happened to the more recent incarnation of Aquagirl? Was she killed in order to prove the seriousness of a line-wide crossover too?