You say you want a "naughty nurse"? Have I got the woman for you...!

I've spoken about this particular groovy chick before, during my encomium of Captain Storm. She's the woman who nursed him back to health with her own brand of "tough love", Nurse Lea Tauntsalot.

Okay, okay ... her last name isn't really "Tauntsalot". Like Lois's black roommate, Lea doesn't get a last name. Frankly, that's probably for the best. Given that she's Hawaiian, and in a comic book, her name is probably something like "Kamanawanaflaya".

Lea's grooviness comes not from trendy clothes or fighting skills. It comes entirely from her ability to wield her domineering personality to crush brave warriors without even raising her hand. Well, and the crisp white nurse's uniform is pretty snazzy.

How groovy is Lea? Propriety, convention, professionalism -- these are as nothing to her. When met with her Fire of Ancient Hawaiian Kings Who Battled Unknown Seas (tm), nothing remains of them except charred embers, baby. 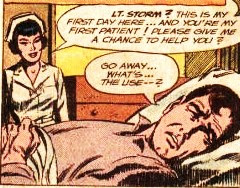 It's her first day on the job. He is her first patient. Captain Storm is to be the first recipient of the gentle kindness of Nurse Lea. Soon she will crush his spirit under her iron will; then she make him her sex toy. Why? Because that's what physical therapists do, baby ... when driven by the Fire of Ancient Hawaiian Kings Who Battled Unknown Seas (tm) 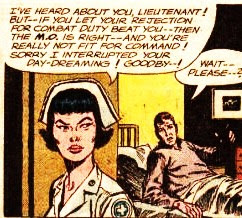 "Those who are tardy do not get fruit-cup!"

"Do you want me or do you just want to lie there and 'daydream' with your 'wooden leg', Lieutenant?" And Captain Storm begs for less bondage, more discipline! "Wait-- please..?" Oh, it's immediately, pathetically clear: it's a match made in Hell! She forces him to earn her "love" by enduring an endless series of humiliating tasks designed to break his spirit and make him her love-toy. 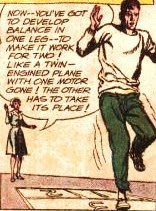 "Dance for my amusement, my little one-legged monkey; dance!" 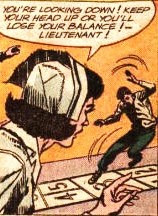 "You're not a man; you're not even a little girl!
Little girls can play hopscotch!" 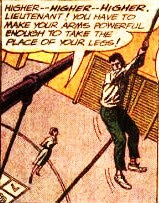 "Higher! I want you to fall as far as possible when your arms finally give out,
so your pain will be that much greater as I laugh
over the broken marionette of your shattered body!" 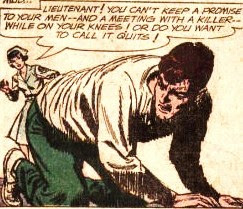 "Crawling on all fours like the dog you are!"
Who knew there were graduate schools in nursing on Apokolips? 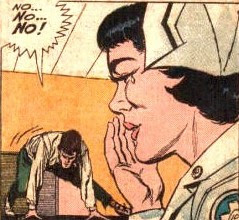 "Blessed Kameamea, I can't stifle the laughter any more! I've broken his spirit so completely-- ah, the laughter, it's bursting from my eyes and flowing down my cheeks...!" 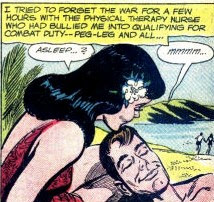 "mmmmWell, I was asleep,
until you woke me up again, you sadistic witch. Kiss me!"

Here she comes a-taunting, with her smile of sick delight!

"Why, you're my little prize, Bill! But you're weak; you can't handle it all. You can't 'man my battle stations' 24 hours a day, Bill, and that's what I want, that's what I demand. You're weak, Bill, and you're going to crack. And when you do you'll lose me, because I despise your weakness, Little Billy Spankypants. In fact, I'm turning away right now. I may be leaving you right now, Bill...!"

You know, with that flower in her hair, she becomes nursing's version of Niecy Nash. She's so cruel, in fact, that, apparently, she changes her name to Wanda for no reason at all.

Maybe it's just to confuse Captain Storm, so that when he calls her by the wrong name, she can give him a tongue-lashing: "Simpering sissy! You must call me 'Wanda' now! And your name is now Billy Spankypants. Speak, Billy; SPEAK MY NAME!"

Perhaps the writers themselves became afraid of her, and changed her name lest they accidentally say "Lea Tauntsalot" three times in a row, and bring her monstrous self from her world into ours.

So, why does Captain Storm endure it? Well, obviously, it takes all kinds. But besides that, Nurse Tauntsalot is HOT AND SAUCY! 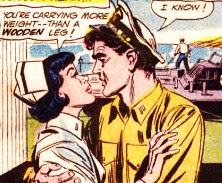 DANG! Well, now we know why she stays with him!
Posted by Scipio at 8:02 AM

Not so much groovy as raunchy but a worthy addition nonetheless. I don't suppose there were any stories where Lea/Wanda appeared in black leather?

Scipio. What can I say? Groovy Chick Month is the best month ever!

Two suggestions if you can fit them in:

Rose and Thorn. (She wasn't so groovy, but they always showed her changing her clothes, in those Lois Lane back-up stories.)

Were you a Kamandi fan? Kamandi sure had one (or two) groovy girlfriends. How can you top topless, feral, future groovy chicks?

Did I hallucinate the post in between the retcon T-shirt ad and this one? A letter to Luthor in prison?

Do I need to have my optical sensors recalibrated?

It won't have effect in actual fact, that's what I suppose.
metal building

"How can you top topless, feral, future groovy chicks?"