If Daphne from Scooby-Doo lived in the DCU, whom would she grow up to marry?

Marie Thirteen is today's groovy chick. Dr. Thirteen may be somewhat unprepossessing, but, his wife? Va-va-va-voom! 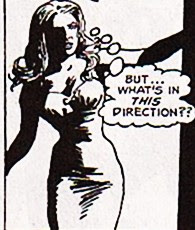 This is how she looks when suddenly awakened by a strange noise in a spooky house.
How does she walk in that thing?

Intelligent and independent, she's also every bit the ghostbreaker her husband is. 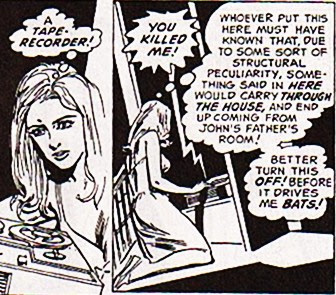 Nor is she your typical damsel-in-distress. Here she is breaking a large vase on the head of an extraterrestrial invader; yes, really. 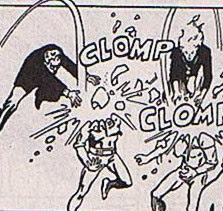 And she's a lusty woman, not afraid of her needs! Here she is hungrily eyeing Dr. Thirteen's butt: 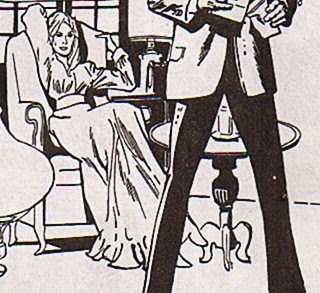 Terry, is that a table leg, or are you just happy to see me?

She seems to have passed away at some point (due to "magic-related causes"), it's still a bit vague whether she was Traci Thirteen's biological mother or what. It's quite hard to picture her living in "Hell's Heart, Washington D.C.'s worst neighborhood" (*snicker*). I am SO sure.

It doesn't make much sense to me, but then again, she lives in universe where no one questions Hawkman's continuity. Still, such a groovy chick, central to backstory of two such interesting characters as Terry and Traci Thirteen, deserves a better, fuller end-story.

I wish some writer would tell it.
Posted by Scipio at 7:40 PM

It's nice to see that a life of skepticism yields... ample rewards.

Perhaps they mean The Heart of Darkness?

Well, she did get zapped by the Spawn of Frankenstein back in Phantom Stranger 23...maybe she's still in a coma!

Just one more day left in the month and unless I missed something the odds of Jean Loring making the cut are slim. Whew. You had me worried there Scipio!

According to the Who's Who, Mrs Thirteen's first name is Marie.

I remember her being put into a coma in the 'Spawn of Frankenstein' back-up feature in 'Phantom Stranger'. Possibly she never woke up from that coma (although, strictly speaking that was a science-based mishap involving a laser rather than 'magic based causes').

According to the Architects in 'Tales of the Unexpected', Traci Thirteen is half-Asian so the chances of Marie being her mother seem fairly slim.

Obviously, Marie Thirteen's full story remains to be told. Perhaps there is a future storyline for 'Shadowpact' here.

Terry Thirteen scored a hottie like that, and he still doesn't believe in magic?

Honestly, I don't know who that chick is, but I laughed a lot with this post.

Don't people get stabbed from there a lot?

Marie was definitely alive and kicking in DC Superstars #18, 1978, along with the Stranger, Terry, Deadman-- who wasn't so much 'alive,' I guess-- Tala, and much of the creative staff from Phantom Stranger v 2 from which all those scans are taken...

Jean Loring is the avatar of anti-groovy. She's probably ahead of Gypo-Bax in the Antimatter Universe of Qward Popularity Contest these days.