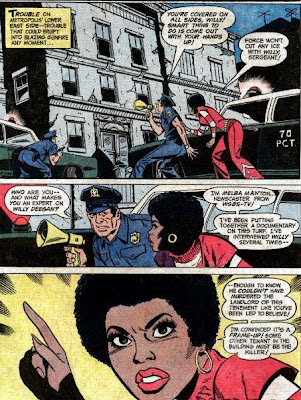 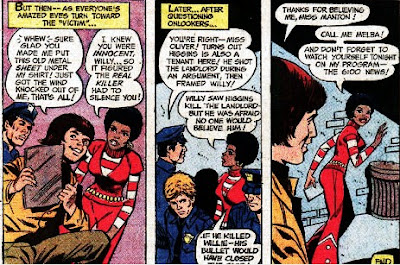 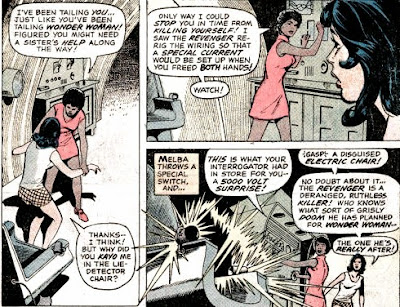 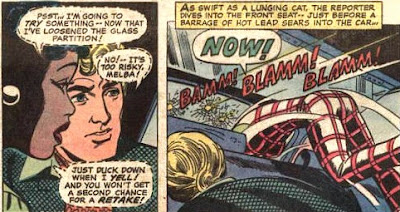 Melba Manton didn't get many appearances, but she was achingly fabulous in each one. Kurt Busiek! I demand the return of Melba Manton to the Metropolis cityscape!
Posted by Scipio at 7:26 PM

The man-with-no-name has nothing on Melba.

I just realised I'm not in your links anymore. What have I done great one?

This is why I'm going broke(r) buying every issue of Superman's Girlfriend I can find.

It's so groovy I can barely take it.

A hot black in green pirate sHirt? I'm sold. (Not sure about the pants though.)

And an electric chair cunningly disguised as a 'lie-detctor chair' that happens to look exactly like an electric chair? How stupid would you have to be to fall for that? (oh. That's right. As stupid as Lois Lane.)

Is it me or is she a little like an African-America Lady Cop?

With extra awsome mixed in.

Nope. Melba knows nothing of VD.

With Melba on the case, the Revenger is toast!

What if the guy 'silenced' Willy with one to the head?

Melba Manton and Jack Ryder would be the most unstoppable broadcasting team in the history of New Earth.

And if you don't mention CONJURA as the ultimate 70s groovy black chick, I'll have to sic vampire Prez on you.