Okay, put on your thinking cap: without knowing anything about her at all, who is automatically, conceptually, by definition the grooviest chick in the entire DCU?

Why, the Phantom Stranger's girlfriend, of course. I mean, Julius H. Schwartz, I feel special just because I'm in the guy's extended network, and she's his GIRLFRIEND.

She's the girlfriend of the Phantom Stranger, who could have any man, woman, or mythical construct he wanted. And she just gets groovier from that point on, if such a thing is possible.

She rescued the Phantom Stranger after he got mugged on New York subway and nursed him back to health. And she was smart enough to know to leave his gloves on, because if you take them off, the multiverse ends. Happened once, in 1985, I think.

Oh, and, yes, he really did get mugged on the subway. Mystically mugged, mind you, but mugged nonetheless. 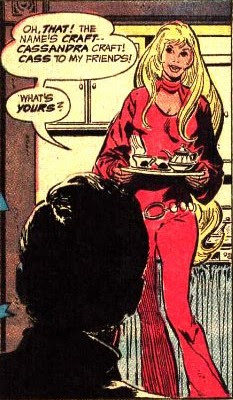 And tough enough to survive simultaneous attacks by Dracula and Frankenstein's monster. She's also psychic. Not a "the Padres will win this year" kind of psychic. A "I know certain things when I need to know them" kind of psychic. Would you expect any less of the Phantom Stranger's girlfiend?

If you're wondering how any mortal could possibly gaze upon the full glory of the Phantom Stranger naked (well ... except for the gloves) and survive, well ... she can, because she's blind. Hence the pink outfit.

Her own grooviness is the only fashion accessory she needs. Although in Grant Morrison's Zatanna miniseries (issue 2) she's wearing the Phantom Stranger's medallion.

Just let that sink in.

The Phantom Stranger
let
her
wear
his
medallion.

That's Cassandra Craft. Here she is sassing the friggin' Phantom Stranger when he tries to pull his "I walk a path none should follow" routine.

Wait -- did she just call a man in an opera cape and fedora ridiculous?

"What? Like I'm going to stay here rather than traipse off to a desert in Egypt with a weirdly dressed nameless guy I found unconscious last night in a subway station?
What kind of a wuss do you take me for, Mister?!"

I've read lots of comics and most of the ones that have the Phantom Stranger in them. In all of that, I can think of only five characters who've ever sassed the Phantom Stranger and lived to tell about it: The Spectre, Darkseid, Eclipso, Dr. Thirteen, and Cassandra Craft. That's might impressive company.

There are none so blind as those who will not see the grooviness of Cassandra Craft. If you know her, you love her. And if you love her, you are ...

the Phantom Stranger.
Posted by Scipio at 1:52 PM

Didn't Womder Woman used to have that outfit in white back in the days when she didn't have powers and was hanging out with a blind Chinese man?

(What is it with DC heroes and blind sidekicks? WW and I Ching, Phantom Stranger and Cassandra Croft, Green Lantern and Kari Limbo [she was blind wasn't she?]...)

Actually Kari Limbo would be another excellent addition to groovy chick month.

Kari Limbo was anything but groovy. Guy Gardner's girlfriend who, the very day she finds out he's dead, starts taking up with Hal Jordan? That, and inability to speak English (presumably her native tongue), makes her the worst portrayal of a Gypsy in comics. And that's bearing in mind that DC Comcs has, well, Gypsy.

I knew we were going to get a 'groovy chicks' about Cassandra! One of my favorite characters.

I was glad that Morrison finally let her put on some new clothes; she'd apparently only owned the one pink jumpsuit from 1972 until 2005.

Constantine and Madame Xanadu count as having sassed the Stranger, and probably Etrigan, too. I don't thin Darkseid does. (During that chess game he just kept saying "Bah!" a lot as he was proven wrong about everything.)

Well that was sweet. I can only assume that he lets her go to that dangerous desert with him...you could tell that he was completely enjoying her sassiness.

Kari Limbo was not blind. She was just INCREDIBLY annoying. She also started snogging Hal Jordan about a minute and half after he told her that Guy was dead. (funny thing about that, he wasn't dead, just pissed)

Hey, I'm myspace friends with the Phantom Stranger! How ironic!

Let's not forget the time John Constantine (accidently?) tinkled on the Stranger's shoes. But that's what he gets for sneaking up behind a drunk Englishman with a midlife crisis.