Hey, I got your letter; the robot carrier pigeon you constructed out of spare parts from the warden's old VHS player arrived yesterday.

Wouldn't miss your birthday party for the world; count me in! As for my suggestions, well, you asked for it, here goes... 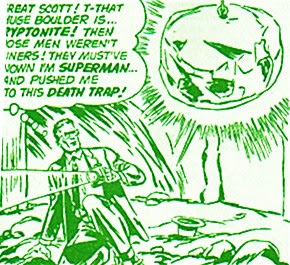 I think that'll make it easier for all of us to relax, don't you?

The fireworks rocket with your head on the top? 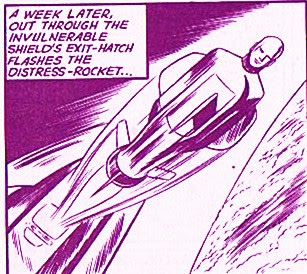 Definitely! I mean, it was a big hit at the Legion of Doom Reunion! 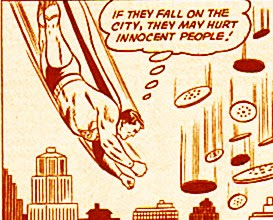 just make sure Pengy brings enough umbrellas for everyone.

I'm up for the Living Hot Dogs from Planet Bollparc (remember how much fun they were during the pantie raid on Beta Omega Pi, LOL?)... 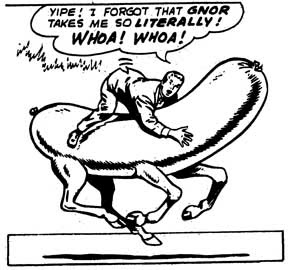 but I have a suggestion on the condiments! 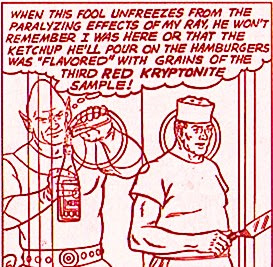 K-balloons, if you've still got some. 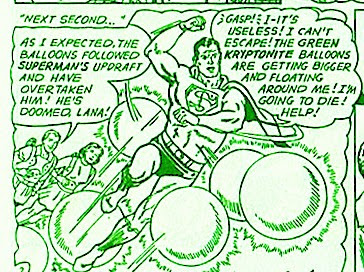 Tom Morrow says he can make an android to blow them up for you. 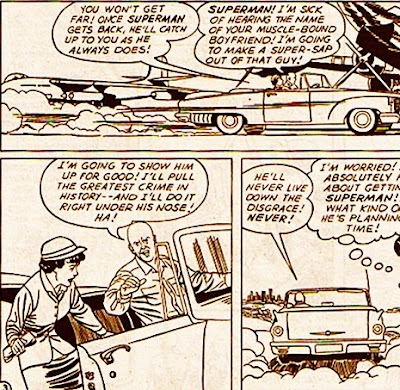 I wouldn't invite that reporter lady from your carpool, even though she is a babe.


Let me know if you need me to bring beer,dude!

Awesome. What do I have to do to get invited to Lex's birthday party?

I will never get that image of the living hot dog out of my head.

A couple of points:

1) I'm pretty sure that taking a truck into space to the point where the ice cream froze would have done irreperable damage to the engine, making it impossible for the ice cream man to continue his delivery, and;

2) If Gnor takes everything Jimmy says literally, what could Jimmy possibly have said to land himself in this fix other than "I wish I was riding a giant hot dog with legs"?

Well, don't be silly; Superman was carrying it. That makes everything fine.

As for Gnor, I do not know; the Gnor story is not in this volume, I just had that panel lying around.

"What do I have to do to get invited to Lex's birthday party? "

How many people have you killed, super-scientifically?

It sucks you in with sweet temptation, soothing your soul and exciting your senses, while slowly destroying your body, but you just... can't... STOP!

Well thanks, that galloping hot dog is going to haunt my dreams for eternity.

I must admit though, that this DOES sound like one snazzy birthday party. I've always found that "Death Twister" is a hoot as an ice breaker.

While some may relish the absurdity of the Weisinger era, I haven't mustard up the courage to purchase this Showcase. Also, if I keep buying these classic reprints at my current spending rate, the IRS is going to garnish my wages.

I realise the Silver-Age Superman had more powers than anyone could keep track of, but wouldn't it have been simpler for him to freeze the ice-cream with his super-breath rather than carrying a truck into outer space?

IIRC, Jimmy said something to the effect of, "I'm so hungry, I could eat a horse", inspiring Gnor to turn his ordinary hot-dog into a giant galloping horse-dog. Gnor wasn't so much literal, just kind of a dick.

"How many people have you killed, super-scientifically?"

Of course, Lex is bringing forty cakes. That's as many as four tens. And that's delicious.

This might be a stupid question, but who'se the guy with the pointy head and ears, the one with the Red K Ketchup?

Is that Lex? Is he wearing a combination Conehead/Vulcan disguise?

Thanks so much for the article, quite effective information.
what are stock options | birthday cards free | cape may nj hotels | used bernina sewing machines | Stretch Mark Remover