I'm the proud new owner of some artwork by Patrick Gleeson.

This one is, of course, the crowning jewel: it's the first page of the Pfeiffer run on Aquaman. You know ... the one that had Aquaman in it. 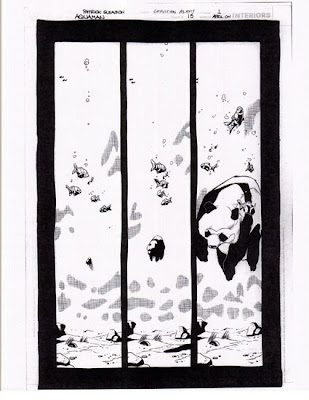 That alone would make it worthwhile, regardless of what it was a picture of. But it's a dead floating panda. Not only is that one of the most brilliantly synoptic images in comics that's been created during my lifetime, it is a perfect example of the appropriate use of silent panels and cinematic technique (which I've railed against when they are used for decompression). Besides, like any true Washingtonian, I harbor a secret, seething hatred of all things panda.

This next one is another masterpiece of comic book illustration, where words are not necessary; it's the first view of the new coastline of San Diego. 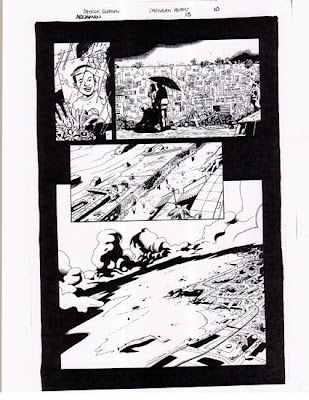 Note how the panels "pan out" in subject, from the intimate loss of a single loved one to the vast scope of the entire disaster. Oh, Sub Diego, we hardly knew ye.

The third may not impress you much, "why, it's mostly some fish in panels without the background filled in!" Ah, but it's one of my favorite comic book pages of all time, in its subtlety and power. Yep, it's just fish swimming in an aquarium in their usual random way. That is, until the last panel, where they are suddenly facing the same way. Toward to the sea. Toward Aquaman. Who's coming. 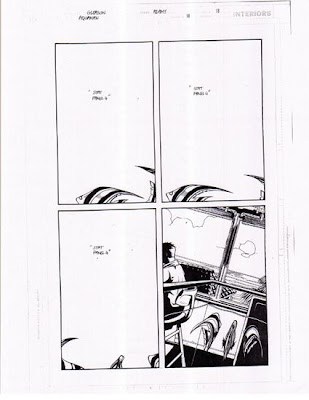 It's enormously creepy and a reminder of how scarily powerful Aquaman is; he's not a mere force of nature, he's a force over nature. He tosses around the biosphere like Batman would a batarang.

The final one doesn't have the same kind of simple power as the others, but it's a marvelous example of the use of different visual ranges to tell a story and the use of different spaces to contextualize the images with one another. Besides, it's got both Lorena and Koryak. 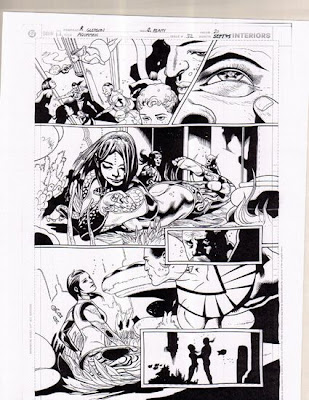 I'm still trying to figure out where to display these in my house and which (if any!) should be at the DC Big Monkey store.

I think the dead floating panda one will just go over my bed.
Posted by Scipio at 6:22 PM

Nice! Man, I'm jealous! You got the panda page!

Pat's stuff is great, isn't it? He did such a wonderful job on every crazy thing I threw at him in that book -- and boy, can he draw fish!

Those are awesome pages. I've always liked that bit with the aquarium fish. And well, what can be said about the panda page that hasn't been said already.

I am hoping that with the current Sub Diego stuff going on in the title, that DC might see fit to toss us a bone and print a TPB of the early Sub Diego stuff. I doubt it but it would be nice. That, and a second volume of "Showcase."

You, sir, are a lucky lucky devil. I LOVE Pat Gleason...the man can simply draw anything. He has such a cinematic approach, and he does those silent pages very very well. Try picking up Green Lantern Corps sometime, the art is amazing.

He also draws different faces, different body types, and the most alien-looking aliens you'll ever see.

I'm the jealous one, Will --- because YOU wrote it,LOL!

Oh, and please feel free to visit them anytime you're here in DC!

All hail the Floating Dead of Panda!

Yes, it's fabulous work. I envy Will his chance to work with Patrick -- I loved the stuff they did together on Aquaman.

You should give the last one to Devon as a token of appreciation for all his hard work and call it "The Lucius Fox Award In Comic Book Excellence."