Just for you, Hal!

I made him Power Battery pogs to recharge him during Heroclix games. I've had custom Heroclix made of some of his good friends, like Black Hand, Dr. Polaris, and Sonar. Why, I even gave him a heavy yellow lamp!

But some people are never satisfied, and fans of Hal are at the top of that list. So I wanted to make Hal some special bystanders tokens, something to really enliven his Heroclix game, to bring meaning to his play.

Ah! I have just the thing! 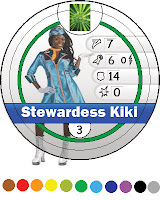 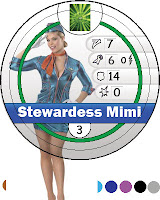 he can juggle EIGHT of them at a time! 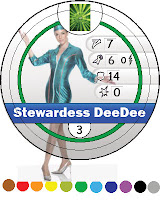 I kid, I kid. Seriously, only eight? Hal's sleezy charm can certainly juggle ten or twelve women at a time. And get a concussion while doing so!

I am NOT his friend! He is my arch-enemy!

That being said, I do not believe I have seen this custom Heroclix figure. Does it capture the essence of Polaris?

Do those groovy stewardesses actually exist in the comics?

Doc, you have seen it; I added a link to remind you.

No, but... shouldn't they? They would if either Gail Simone or Grant Morrison were writing Green Lantern.

Oa should have stewardesses that serve beverages, nuts, hot towels, etc. to the Lanters while waiting for their meeting with the higher ups.

Also, about Aquaman, did you like his water hand? I always thought it was pretty cool, but poorly executed. I would have loved it if he could absorb water from anything with it, or give water to anyone who needed it..

That said, you could have dressed them in yellow to give them a fightin' chance.

Three more reasons that Hal is the GREATEST!