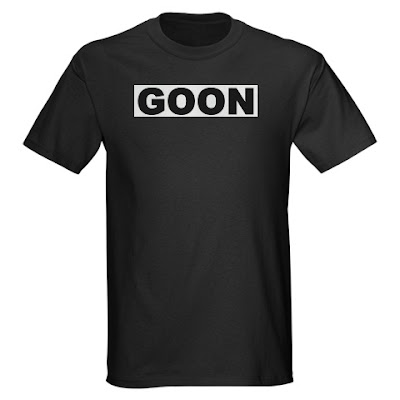 The new "GOON" shirt that's now available from Big Monkey's on-line store, in a wide variety of colors to match any supervillain's outfit.

Best thing I've found at Wikipedia for a long time comes from the entry on Tyroc.

Among the screams in Tyroc's arsenal:

Jon's new sidebar item over at Facedown in the Gutters.

Heh. Heh heh. Speaking of Jon, he was part of the Big Monkey podcast last weekend; it was great to have him there, except we kept breaking up every time he said, "I write Facedown in the Gutters". Well, that would explain a great many things, Jon...
_______

The new "Duo Character" figures that will coming out in the summer Heroclix sets.

"Duo Characters
A character with the attack symbol
is a duo character. Duo characters may
not be carried and have the Duo Attack
special ability.
DUO ATTACK (optional):
Give the character a power
action to make a duo attack. It makes two separate
attacks against opposing characters as free actions
(making two separate attack rolls). These attacks
may be close combat attacks, or ranged combat
attacks with a single target. Resolve the first attack
before making the second; the character’s damage
value is modified by –1 for the second attack, to a
minimum damage value of 1. If the character is KOd
as a result of the first attack in a duo attack, the
second attack is not made."

We don't know yet who might be on such dials, but it's interesting to speculate! I hope it's used to make generics (say, GOONS) with a little more utility.

Blockade Boy has gone back to weekday posting. Thank god.


My new SUB DIEGO heroclix map, which came in the mail this week from Xion! It's subtastic! Thanks again to Kyle Latino for designing it; Kyle, all water-breathers thank you.
Posted by Scipio at 5:21 PM

Like you ever thought I posted sober to begin with. Of course I'm facedown in a gutter, I'm Irish.

One of Tyroc's lesser known screams: