Terror of the Two-Headed Coin 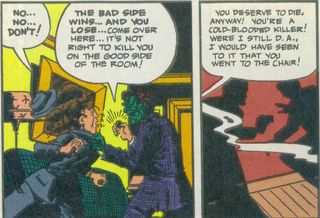 As an inveterate Two-Face fan, I've been looking forward to the "Batman:Jekyll/Hyde" mini. Batman's most psychologically complex villain was owed a solid storyline, certainly after what DCU allowed that idiot Loeb to do with him in "Long Halloween" and "Hush".

But this ain't it, folks.

Like many DCU villains, Two-Face has been the victim of "Savage Simplification", the DCU disease that infects writers' sophistication, wasting away their ability to portray characters with any but the broadest strokes. Jekyll/Hyde is the latest example: "Oh, Dent's a 'split-personality' with poor, good Harvey trapped and fighting evil Two-Face!" Talking to his other self. Calling himself "we".

*Sigh* Two-Face reduced to being Rose & Thorn's prom date. As originally conceived and portrayed until the Crisis, Two-Face was much more realistic and interesting. "Two-Face" wasn't the breakdown of Harvey Dent's personality, he was the synthesis of his disparate good and evil impulses. Two-Face wasn't the evil side of Harvey Dent; he was the combination of his evil and good sides, and that was what made him effective, interesting, and hard to cure.

The above excerpt from his original story makes the point. Two-Face was able to reinterpret good and evil to his own purposes, confusing them so as justify any behavior as acceptable to both his good and bad impulses. But then again ... he was a lawyer.

As Socrates is reputed to have said, "No man knowingly does evil." Therein lay the terror of Two-Face: he symbolizes our ability to justify own our evil. Each of us.

And that scares me a lot more than Sybil.
Posted by Scipio at 8:31 PM

I've been enjoying the way you liken comics to Classical literature, and especially here with Two-Face. (Also, the Batman / Oedipus thing with regard to "War Games".)

Ack, I remember when I first read this post. (I'm posting this as your non-denominational winter solstice gift.)

I should have commented then. This made me look at Two-Face in a new and terrifying light.

As much as I love the "There's just one problem... You're talking to the wrong Harvey." line from BtAS, this makes for a far more scary and interesting character.

Two-Face is my favourite Bat-villain for many, many reasons. But he is often badly written (or really badly portrayed on film). I am looking forward to the next Batman movie because I have a feeling they might just get Harvey Dent right.

I like Two-Face because he tortures Batman in two ways: one because he is his former best friend and Bruce is convinced that he can somehow cure him; and two because Two-Face is everything that Bruce is afraid of becoming. And he sees too many similarities between himself and Dent. The best writers capture all of this.

Some of my favourite Two-Face stuff is in Gotham Central with Rene Montoya.

So, since this is an old post that I am responding to, what did you think of Jeckyl & Hyde? (We're talking about the Matt Wagner series, right?) I thought it was pretty great.

AND...do you have any thoughts on who should be cast as Harvey Dent in the next movie? Obviously, he has to be a complete dreamboat...

Yes, if you genuinely want "mature themes" in superhero comics, these are them...what a comic! You hit it on the head, Scipio. Much as I love The Joker, Two-Face is the greatest Batman villain ever. Because he's about something, that any reader can understand.

I do despair of ever seeing this Two-Face in a Batman movie/TV vehicle, though. One has hopes, obviously. But it's already been demonstrated (in TAS) that loads of wonderful hay can be made in that medium just by following the "split personality" thing, and so why wouldn't a filmmaker continue in that vein? Meanwhile, I wonder if the real Two-Face can be handled well outside of comics, at all...just as the new Two-Face has no place outside rolling strips of film, I think. Well, but that's me, and for my money everything that's wrong with the current comic-book Batman can be solved just by fixing the villains that Bruce Wayne is defined in contradistinction to...restore them to their previous brilliance, and Batman will be restored to his in that selfsame instant.

(Although, you know, I'd keep the Englehart Joker and his laughing fish, anyway.)

Having said which...maybe Rachelle is right, after all. When Batman Begins came out, I thought there was no point to it: once you have TAS, what more do you need? But I was wrong, so wrong...and maybe that filmmaking team can work similar wonders on Harvey and the Joker.

Did I already mention this post hit the nail on the head? I did? Well, I'll say it again. Fantastic job. God, Two-Face is a great character! I so look forward to seeing him again, one day...!

Me again...I just wanted to correct myself because I got Jekyll and Hyde confused with Matt Wagner's Faces. Because I was tired. And obviously Faces came out, like, 11 years ago.

Anyway, what did you think of Jekyll and Hyde?