The Most Evil Object in the World 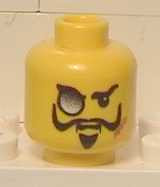 The Most Evil Object in the World
Originally uploaded by Scipio1.

Based on the theories of Devon (who erreth not) at Seven Hells, I have determined that this is most evil object in the world.

Speaking of Devon, is there a reason that the good folks at DC Conspiracy aren't working with him to publicize their independent comics? After all, he is the manager of the largest comic book store in the nation's capital.

Speaking of DC Conspiracy, why aren't they linked to Yet Another Comics Blog, who's holy mission is giving away interesting independent stuff to those of us stuck in the two-company shuffle?

And since YACB runs a "Monkey Cover Day", oughtn't they link to Big Monkey Comics?

Then wouldn't Big Monkey link itself to Comic Riot, since both are "reality shows" about what it's like to open your own comic book store?

And, as long as Comic Riot is an expert on goofy Marvel villains, will we see them weigh in on the Seven Deadly Signs of Evil?

What's the point of links if they don't form a chain?

Seriously, he might be able and willing to help you guys somehow.

We do actually work close with some of the shops. The group itself is more get together, drink a lot and work on ideas together (including promotion so we're always willing to talk to new shop owners). So, thanks for the heads up.

Anyone in the area is invited, we have plenty of fans show up that aren't creators. And they usually walk home with plenty of free books and drunk as a skunk.

the RIOT will chime in on the 7 Deadly Signs once we see the rest of them...then we'll find someone who embodies all seven and encourage them to pursue world domination...just because.

Oh, I'm pretty sure there IS no such person/character...!

Well you did find someone with the first three.

I need this...this...beautiful,beautiful toy in my life. "choke" "sob"

And you can have it! It's the head of "Lord Sinister", of the one bad guys in the Lego "India Expedition" set.

He's so evil he also has a top hat and a hook hand!