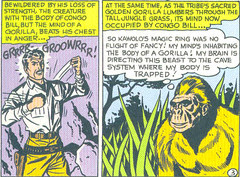 congorilla
Originally uploaded by Scipio1.
Hello, I'm Congo Bill; that's me on the left, beating my chest and grunting incoherently. But that's also me on the right, inhabiting the body of a giant golden gorilla. Confused? Just relax and enjoy it folks, it's the Silver Age. It's just like reading a Jeph Loeb story, only there's some internal consistency and attention to plot.

Once upon a time I was hot stuff, totally ha-ch-cha! I was running back-up feature for, oh, 15 years and I had my own book for a while. I even starred in a 15-part serial; I was a star, I tell you.

Then they stuck me with this gorilla-mind-switching schtick. Dang DC in the 1950s and their contract gorillas! I blame the Mod Gorilla Union Boss and his stooge, Sam Simeon. Still, it shows why I was a star and you readers aren't. When I, Congo Bill, discover my mind is switched with a gorilla I say, "So Kawolo's magic ring was no flight of fancy!" Such is my worldly poise. You, on the other hand, would say, "What the @##$@ I've gone out of my @(#$&* mind or Grant Morrison has taken over my @#*$& life!"

Why should you vote for me in the Comeback Poll? Simple: DC OWES ME. I was a star and they made a monkey of out me. And, yes, I had not one but TWO Vertigo minis in the 1990s ... that just shows how much the people still love me, baby!

Am I totally misremembering the early issues of Morrison's Animal Man as featuring a weirdass Congo Bill story? Or was it maybe Bwana Beast? I always get confused trying to sort them out.

It was B'wana Beast, another guy who gets with powers with the help of a gorilla.