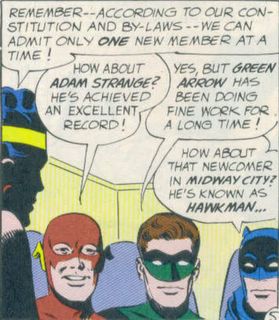 Okay. So my beloved Thanagar lost IN MY OWN POLL. Even though 4 out of 5 comic book blogs side with Thanagar. *Sigh* Adding insult to injury, Rannians are even winning in my poll about Krypto's theme song. *Choke* *Sob*

But I'm not bitter. Oh, no. I promise to defend all Absorbasconners, even Rannie-sympathizers, against destruction when our new avian overlords take over this planet. I'll even make sure you get to bunk together at Thanagarian Re-Education Camp.

MEANWHILE... by way of a warning, consider the above panel.

Batman, billionaire sophicate, babe-magnet, and hero-about-town, sides with Hawkman of Thanagar. Batman stars in 17 different titles, has two concurrent cartoon series, and is about to star in his sixth major motion picture.

Oh, and then there's meathead-in-the-middle Hal Jordan, advocating for the guy who laters kills him by shooting an arrow through his heart. Don't any of these people even read their own previews?
Posted by Scipio at 11:09 AM

Email ThisBlogThis!Share to TwitterShare to FacebookShare to Pinterest
Labels: Green Arrow, Green Lantern, Why we hate Adam Strange and the Dirty Stinking Rannies

Ah, but Barry is now a Saint in the pantheon of DC martyrs, while Batman is a jerk who can't be trusted to keep his own plans for destroying the Justice League / Gotham City / all of the superheroes in the world safe from bad guys. Batman's judgement is severely lacking as of late.

On the other hand, one good thing that both Adam Strange and Hawkman have in common is that neither of them are Green Arrow. And neither of them have Hal "Green Lantern Corps Killer" Jordan rooting for them either.

In preparation for the inevitable "Thanagarians and Rannians learn to love one another and form a viable joint society" ending to the war, I'm preparing now to lead the Anti-Green Arrow campaign that we can all get behind.

Note that Devon (who erreth not) at Seven Hells has already begun his campaing against Speedy....