Atom-Smasher, In or Out? 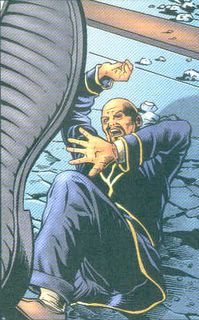 In case, you don't recognize it, that's the boot of Albert Rothstein, a.k.a. Atom-Smasher, from JSA #56, about to shmush Asim Muhunnad, the leader of Kandaq. Not a distant, "oops, did I just step on an ant?" kind of shmushing, but a, "gosh, even through my size 142 boot I can feel his 200 plus bones cracking, and does anyone have rag with which to wipe his guts off my heel?" kind of shmushing. This wasn't a UN-sanctioned intervention, or a multi-national anti-terrorist coalition sort of outing. It was more of a "hey, let's the six of us overthrow a dictator this weekend, because we're superpowerful and can do whatever we want, and then throw a kegger" kind of outing.

The most recent JSA issue ended in a cliffhanger, with the JSA about to announce whether they would accept Atom-Smasher back. Is this the kind of person you want in the JSA? [Vote in the Absorbascon poll!]

If we need an Atom legacy in the JSA (and we do), let's pick the right person: Damage, who is the original Atom's son. He's in the Freedom Fighters at the moment, but he's redundant with the Human Bomb, so move him to the JSA. Atom-Smasher, with his history of stupid names, costumes, and behavior is at the end of his time as a hero. He was one of the Infinitors, who were the "stand-ins", the inheritors of the JSA legacy while they were away. Well, now the JSA is back, and Albert clearly doesn't belong. The other Infinitors have all moved on or passed away; now it's Albert's turn.

Hi, I just discovered your site- it's great!

I stopped reading JSA after the Hawkman crossover (along with many other comics, for financial reasons). I don't know what Atom-Smasher has been up to since then, but I do know he was a very confused individual after the fights with Extant and Kobra, and allowed himself to be led astray by Black Adam's promise of pro-activism. I think Al needs counselling, and supervision, but not jail time. I don't think he should rejoin the JSA. Damage? I only know Damage from the Grayson/ Buckingham Titans and (ugh) Zero Hour. While powerful, he seemed like a sloppy rookie who whined alot. Are there any comics out there in which Damage has a more likeable personality?

I gave it up when the baby got shot in the high chair. That was probably about six issues after I should have dropped it, but I'm a bit of a masochist.

What did happen to the other Infinitors?

So some of Infinity Inc. is still in the JSA. I do think that poor Al's been pulled through the wringer - probably moreso than anyone else on the team.

I think Damage could be a good member of the JSA, but I'm not sure - it depends on what they do with him. From what I remember of the character, the Outsiders might be a better fit...

Mike: welcome! I agreed Damage needs some guidance and growing up. But so did Jakeem Thunder and Stargirl...

David: check it out again! While Geoff Johns often has kind of weak ending to his stories, most people find the "JSA ride" worth it.

Jer: Lyta's actually back now, through one of Geoff's patented bait-and-switch magic tricks. As for the Outsiders, that's where I think ATOM-SMASHER should go.

Actually, the Infinitors had a good 30 issue run (well, a pretty bad 30 issue run, but a 30 issue run nevertheless) before the JSA took their Crisis-mandated bow, and were unceremoniously swept under the Ragnarok.

And yes, their first issue was a completely superfluous, throw-meat-to-the-slavering-fanboys brawl between mentors and mentees that could have been avoided if any one of the characters involved ever picked up a phone.

It was so superfluous, in fact, that it marked the book with the heady stench of Marvel that it would never completely lose....

Yes, there WAS something Marvelesque about Infinity, Inc., wasn't there? Smells like teen self-doubt, I suppose...

By the way, the majority in our poll wonder why the JSA hasn't put Atom-Smasher in jail!!

I'm not sure what jail they want him to go to. Perhaps a trip to the Hague for a war crimes trial is in order. But putting him in Belle Reve or the Slab seems a bit odd.

I thought the original option -- that he couldn't leave Khandaq's borders -- was good enough then and probably good enough now.

Me either, Dwinn; a very BIG jail, I suppose...

Couldn't care less about his redemption, because I never could hold any interest in his .... um... demption.

The character just needs to go away.

Someone needs to sit him down, and say:

"Al. Dude. See us? See all of us at this table? We're superheroes. We help people. We fight crime. Our costumes were historically patterned after those of acrobats. We belong here.

Now, look in this mirror. There now. See you? Do you see you? You're a cringeworthy placeholder notable only for a crippling and uninteresting moral ambivalence. Your costume was patterend after that of a beery luchadore. You belong on a 3 a.m. cable access show."