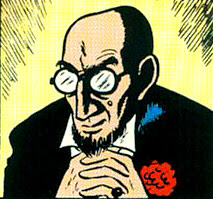 Human zyches can be divided, if you wish, into two types: zoze who are confident zey will be wanted by ozers, and zose who are not.

Zose who are confident in zeir zelf-worz, of courze, still like to be wanted. Zey engage in healzy relazionzhips wiz zose who want zem. For example, when ze Thanagarian Army posters callz out to zem, "I Want You!", zey react pozitively and ally zemselves wiz ze liked-minded confident people of Thanagar. Admirable, strong people. People who can endure pain. People like

Many zuperheroes zuffer from zis zyndrome; we call zem Alien Zaviour Zyndrome Zufferers, or AZZZes, for short. Zadly, a member of my own family haz zuccumbed to zis zyndrome, my American cousin, Adam. Poor cousin Adam! Despite an illustrious career as a despoiler of primitive tribal cultures of Earth, he haz, over ze years, become a total AZZZ. Adam, and zose like him, azzoziate only wiz ze desperately needy and intentionally helplezz people, zuch az ze people of Rann. It is to be expected, perhaps, yes? Ze zyndrome in perhaps inherent in ze American mindzet. Except for BATMAN!

I caution you, my American friends. Do not zuccumb to ze zyndrome; do not risk becoming an AZZZ by aiding ze zelf-crippling Rannians, who will trap you in a stranglehold of codependenzy. Zeek out zose wiz whom you can develop an interdependenzy of equals, confident people, strong people, like the people of Thanagar, people who can wear leazer boldly, and hoods, people who can give you pain and take pain and withstand a whipping and who are strong, who are people like

I think we can all learn a lot from Dr. Strange. Both of them. But not Adam Strange. He's a hopeless wimp.

I don't believe this Strange guy's bonafides for a moment. He brings up Batman 3-4 times and never once accuses him of having improper relations with his sidekick? And omits the trenchant observation that even a Zufferer like Adam did in fact have such sidekick-relations, the one point where he most resembles his Thanagarian counterpart?

He brings up Batman 3-4 times and never once accuses him of having improper relations with his sidekick?

Maybe because that's been done so many times, it's not even funny anymore, let alone clever or original.