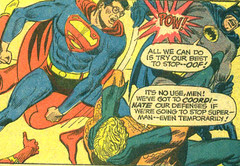 And if further proof is needed of Batman's super-wallop-taking power!

Pre-Crisis Superman's left hook; just think about that for a second. Why is Batman's detached head not sailing toward Antares at this point?

Aquaman, covering his sensitive sonar-ears to block Robin's girlish shrieks as Batman's teeth go flying across the satellite, actually forms a plan. Unfortunately, there are no giant sea turtles in geosynchronous orbit 22,300 miles above the earth.

Flash approves with a thumbs up; he never liked Batman anyway....

But that's not Superman, its Clark Kent in a Superman outfit - can't you tell by the glasses? And Batman should be able to easily withstand a punch from a wuss like pre-Crisis Clark Kent.

Your Silver Age logic is unassailable!