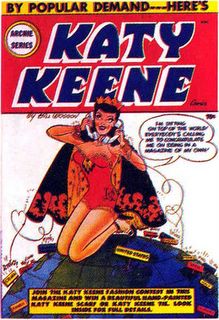 The Queen of the Universe has returned! Katy Keene is back and I was proud to get a copy of her "re-debut" issue (courtesy of Devon, who erreth not, at Seven Hells!)

You think Superman is invulnerable? Ha! One costume change and he became unrecognizable to his fans, who, their minds misfiring, donned red towels and flung themselves out windows as the universe attempted to fill the vacuum. Katy endured thousands of hideous outfits, page after page, for decades. While smiling. In heels. Now that's a superpower.

But let's remember Katy for her contribution to the entire industry: reader interactivity. Two generations before anyone dialed an 800 number to kill a Robin, readers were devising outfits for Katy and mailing them to the editors. Bizarre though some of those outfits might be, Katy wore them, inspiring a legion of future fashion designers.

Her new comic book is silly. A paper-thin plot. Pale jokes. That's okay, though, because it wasn't written for me.

Besides... the outfits are fabulous!
Posted by Scipio at 10:29 PM

It was a 900 number meaning you had to pay to call!