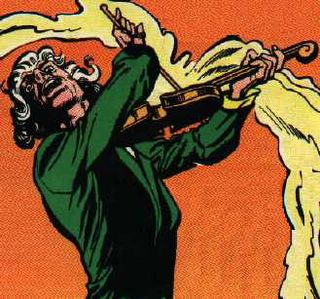 In memory of the late, great Isaac Bowin, we continue our search for a Green Lantern theme song. Our research has eliminated the Even Rude song, because despite the title it's not about the Green Lantern. What do you think?

In fact, after staring blankly at the lyrics for 30 minutes, not only do I not know what the song is about, but drool began to fall from my mouth and I questioned the existence of the gods. So much for Even Rude. You kids today, with your denim shades and bloody cautions! I blame it on that Casey Kasem fellow.

I actually wrote the Artist Occasionally Known as J-Sin Starr to see whether he could supply with us a copy of his Green Lantern song. Since it's full title is "Green Lantern: Hal Jordan" I'm betting it actually does have something to do with Green Lantern; just a gut feeling.
Meanwhile, the putative "Green Lantern Remix" of this "Blue Harvest" group is starting to seem about as real as the imaginary story in which the son of Lex Luthor and his wife Lois Lane killed his dad after being inspired by old home movies of Lex Senior using animated kryptonite rock monsters to attack Superboy. For you kids out there who might not know, the Silver Age DCU gave us "Imaginary Stories" with wacky plot and character developments not part of regular contuinity. But then the DCU grew up and pretentiously renamed them "Elseworlds", realizing they could charge extra money by printing them separately and on shiny paper.

Complicating the entire affair is this idiot "DJ Green Lantern" who creates dance remixes and frustrates any search-engine-based attempt to find music ABOUT Green Lantern. I can only hope he falls victim to a drive-by shooting by "Rapmaster Sinestro" in a big yellow car....
Posted by Scipio at 7:22 PM

Hmm. I guess, the Corp being basically a galactic police force, the best possiblity is the COPS theme ("Bad boys, bad boys, what ya gonna do..").

I thought that song WAS played on a theremin...

The only Green Lantern song I've ever found is 'Green Lantern' by Blue Harvest; found it on iTunes. Haven't found a link with the lyrics spelled out but it mentions all the major GL's by name and order of appearance :)

A Man without Fear/
and that's for sure/
he got his Ring from Abin Sur/
He fought all the evil hordes/
and he's the real one/
Hal Jordan.

I just found this blog! Love it! Anyway, I'm guessing that song is about the death of Kurt Cobain, right down to the 'hole' pun

Did you ever find the J-Sin Starr song?

Has anyone considered that Project 86's newer song "Illuminate" might make a suitable theme song for Green Lantern?

It seems to carry some of the "in brightest day, in blackest night" themeing, shining light into darkness. Just a thought since there will actually be a Green Lantern movie now (yay!).

You've Got the Touch by Stan Bush
(as featured in Transformers, and Boogie Nights)

After all is said and done
You've never walked, you've never run,
You're a winner

You got the moves, you know the streets
Break the rules, take the heat
You're nobody's fool

You're at your best when when the goin' gets rough
You've been put to the test, but it's never enough

You never bend, you never break
You seem to know just what it takes
You're a fighter

It's in the blood, it's in the will
It's in the mighty hands of steel
When you're standin' your ground

You're fightin' fire with fire
You know you got the touch

You're at your best when when the road gets rough
You've been put to the test, but it's never enough

(p/s on a side note, that green lantern song by Blue Harvest, is also listed as green lantern by Simple Frustration, and for some reason it's the exact same song