Kids; they think everything is new. Well, long before characters like Animal Man and Ambush "pioneered" meta-awareness, Wonder Woman made it obvious that she was a regular reader of her own stories... 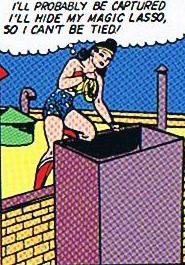 Oh, I've made some fun of the whole Wonder Woman bondage thing, but frankly I don't like to because, well, it makes me rather sick how Moulton got away with it and for how long. Nowadays such a person wouldn't be allowed to write for AG comics, let alone DC comics. Nowadays, Moulton would have to write for Bound & Gagged or be penning Saw III. 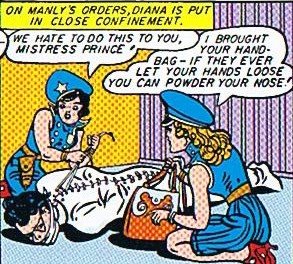 Yes; yes, I'd definitely say that counts as "close confinement".

I mean, really, there's no way to exaggerate it for comedic effect, because it can't be exaggerated. And it's not like one can make sniggering innuedi at such obvious B&D one might as well try to make ribaldry about The Boys.

So I shall praeteritively press on to the story whose oddities sparked Wonder Woman Week here at the Absorbascon, the one where Moulton gives us his idea of the future. I haven't the strength to recall in any detail the, well, I guess I'll call it "the plot". Suffice it to say the Amazons pulled out some Golden Plot Device that allows them to show the world of 1000 years hence.

Wonder Woman and her friends are still alive; don't ask. Gee, Moulton sure got that one wrong; Etta Candy didn't even make it to New Earth.

The first woman president has just been elected. Such was Moulton's great faith in women that he thought it would take only 1000 years for one to be elected president.

She's opposed (of course) by a "man's party", which includes Senator Heeman and the aptronymical Grafton Patronage; obviously Moulton and Kirby sat behind each other in "Naming Your Characters" class at Comic Creator College.

Woman are (still?) silly ninnies easily fooled by men and swayed by their looks.

There are still secretaries. They are still all women. They wear horrid costumes with built-in devices that allow dictation to be beamed to her brain and automatically controlling her arms. And Diana Prince is still a secretary, working for the same General she's always worked. For the last
ONE
THOUSAND
YEARS.

Heck of a glass ceiling, that. 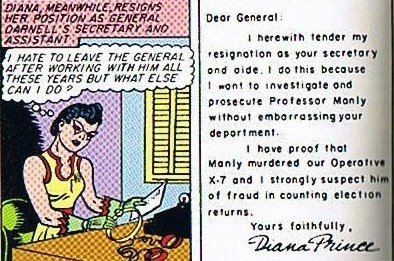 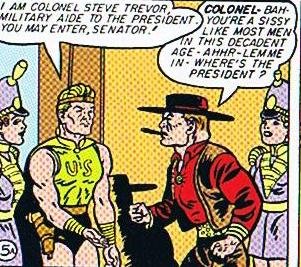 In the future, you see, Blockade Boy designs everyone's outfit.
Posted by Scipio at 7:53 AM

Obviously I'm quite manly then.

I always knew that Wonder Woman was a kinky comic, but that white leather body bag is the single most perverted thing I've ever seen in a mainstream comic. And the "powder your nose" bit just makes it worse. No wonder all us comic fans grew up to be...

"...and I strongly suspect him of fraud in counting election returns."

It's not Terra-Man, it's John Wayne.

"In the future, you see, Blockade Boy designs everyone's outfit."

*sighs wistfully* And won't that be a Golden Age? Well, more like Orange and Purple, but you get the idea. I'm already compiling a list of my demands -- er, tenants. Like, "No belly shirts on women! And no shirts of any kind on men!" (There will, of course, be rigorous mandatory exercise programs.)

"...some Golden Plot Device that allows them to show the world of 1000 years hence."

I'm only half the man Terra-Man was.

And nowadays, neither is he! Haw!