"Sadism consists in the enjoyment of other people's actual suffering. Since binding and chaining are the one harmless, painless way of subjecting the heroine to menace and making drama of it, I have developed elaborate ways of having Wonder Woman and other characters confined."

"Confinement to WW and the Amazons is just a sporting game, an actual enjoyment of being subdued. This, my dear friend, is the one truly great contribution of my Wonder Woman strip to moral education of the young. The only hope for peace is to teach people who are full of pep and unbound force to enjoy being bound. Women are exciting for this one reason - it is the secret of women's allure - women enjoy submission, being bound. This I bring out in the Paradise Island sequences where the girls beg for chains and enjoy wearing them." 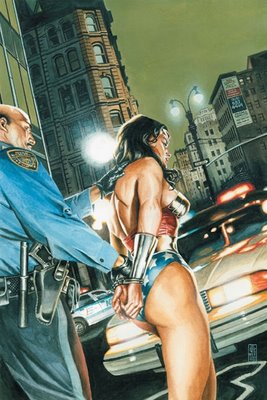 I don't have anything against your garden variety bondage/submission hobbyist but to act as if it should be a common right of passage for children to enjoy being bound?! Only a sick and guilty mind would project his particular kink on the rest of the world. I have to imagine that there are people who enjoy bondage and submission without thinking it's part of moral education.

And women are exciting for that one reason?

I'm not sure that I'm getting your point about Marston. Is it that he was working his kink into a comic book, or that he was so blatant about it?

Granted that Marston's Wonder Woman stories were absurdly over the top in this regard--part of the reason I find them so fascinating--but good God, fetishism always was and continues to be a significant subtext of the superhero genre.

The difference, from my point of view, is that Marston made it text. The others merely drew stories in which muscled men and women in skin-tight costumes (which were, for the most part, "naked" figures with a few extra lines to denote clothing) wrestled and captured each other, then pretended that it was all innocent fun. (Werthem may not have been right, but he wasn't exactly wrong.)

I did enjoy bondage games as a kid, long before I had any clue about their sexual nature. And I read a lot of Nancy Drew, especially the ones where Nancy and her pals were tied up. Marston didn't make me a perv, but I have to say, discovering the Golden Age Wonder Woman was a real eye-opener.

Sloppy cuff handling. You never grab the chain. Good way to get a broken finger. Also, he should be standing off to her right to protect his weapon. (I know it's Wonder Woman, but still . . .)

The implication that if someone enjoys it, it's okay, is on the face of things correct. At least to my libertarian, known people into B&D, mind.

It's the implication that *every* person of a particular sex has this particular kink that I find disturbing and problematic. It seems depersonalizing and all too likely to lead to the conclusion that it's your right to forcibly initiate them as to what their real desires are... and that way leads to 'she asked for it' excuses for rape and other heinous acts.

Not that I think Marston was necessarily that reprehensible in his personal life (he seems to have been lucky enough to find partners that either enjoyed or willing to indulge him in his quirks), but it does seem a slippery slope.

Now here's the interesting question, though. Even assuming we all agree that Marston working his bondage kink into his comics is pretty icky (although I don't know that it was really going to pervert anyone who wasn't primed to find bondage appealing anyway), is this pattern of Wonder Woman and company always getting bound and tied up, but invariably either escaping or being released, unharmed, *better* or *worse* than modern storylines such as Identity Crisis and the whole Women in Refrigerators syndrome? Or, even compare it to earlier efforts such as the rather sadistic violence common to the EC comics...

At least Wonder Woman wasn't usually subject to pain or actual injury in the course of these storylines.

Also, I don't normally buy in to 'but they do it to the men, too' apologetics, but in this case of bondage, does it occur to anybody that Batman, Robin, and James Bond all get subjected to a lot of deathtraps, in which the prospect of a messy death is added to the bondage factor? Not as relentlessly as Marston's Wonder Woman got tied up, admittedly - well, except maybe for the 60s TV Batman.

So, has anybody examined the semiotics of the Batman/Robin/Batgirl human pretzel yet?

It's the implication that *every* person of a particular sex has this particular kink that I find disturbing and problematic.

Good point. And make no mistake, Marston was a kook. After further reflection, I can certainly see having an issue with his declared agenda of "moral education for the young" through bondage. The other difference between Marston and most comics creators was that psuedo-psychological background; he actually believed he was making the world a better place by baking Amazons in a pie.

The reason I posted is that I'm not entirely clear on the nature of Scipio's objection. It may not have been what he intended, but I came away with the impression that he felt that the fact that there are people out there obsessed with superhero bondage (and that there are comics creators who are happy to indulge such fantasies) is itself a bad thing. Like every kink, it can be taken too far, but for Heaven's sake, there are scarier and more dangerous fetishes. Marston's a wack-job (in more ways than one), but I don't find him all that loathsome.

As for your question, I do object to the likes of "Identity Crisis" (which I have not, nor will I ever, read) much more than Golden Age Wonder Woman or even EC. Raping Sue Dibny crosses a line that Marston never even approached. And at least EC Comics, for all their gore, had a very strict moral code; the worst horrors were visited upon those who transgressed society. If "Identity Crisis" had been published by EC, Dr. Light would not have lived to "mwah ha ha" another day.

I want to see Wertham & Marston in a cage match.

Dwayne: "I want to see Wertham & Marston in a cage match."

We might've gotten one too, if Marston had still been alive when Seduction of the Innocent was published. Marston was never shy about confronting his critics, and he might well have been the one guy in the comics industry with both the balls and the academic credentials to stand up to Wertham. Alas, it was not to be.

well, except maybe for the 60s TV Batman.

Yeah, no kidding. I don't know anyone who was perverted by classic Wonder Woman, but when you've got Julie Newmar in a catsuit tying people up in a giant teacup, well, then you've really got something.

It'd be cool if you cited sources. I'd like to read the rest of whatever this is from.

Is that Sipowicz taking Wonder Woman away?

If Marston weren't a bit nutty, Wonder Woman wouldn't have any cultural resonance. He had a unique vision which stood out from the pack of Superman imitators, not just because his character was female but because she had a twist. She was an exotic woman from a mystic fantasy land making her way in a strange world. Her people had unique and strange customs. This was interesting to people, and so it lasted.

What is the source on this? Like the commenter above, I'm curious to read more.

It's from his infamous interview with Family Circle magazine, August 14, 1942.