Because Dwayne Demanded It! 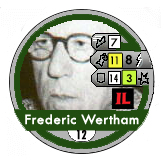 The Dr. Frederic Wertham pog has the "Pulse Wave" Attack power, so that he can do damage to all surrounding characters at once, including his teammates. His Damage power grants him the ability to "Exploit Weakness" in comic book characters he finds unfit.

Like his work, his range of damage is extensive, but his Defense value is low because he's easy to attack. 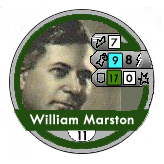 Dr. William Marston's pog does no intentional damage, because he's a lover, not a fighter. But the Master of Bondage can tie you up with his "Incapacitate" Attack power, bringing even the most powerful figures into submission. His high Defense value and "Deflection" power allow him to evade many serious attacks, no matter how deserved they might be, as easily as bullets bouncing off bracelets.

It should be Dr. William Marston.

YAY! Go ME!!!
I was thinking that Wertham would have Exploit Weakness, pretty tricky that the Big Three are immune.
I would think that he would also be immune to the Mystic ability since he so easily attacked the horror books & eventually brought Conress along for the ride.

The Big Four (ahem!) are immune because, despite Wertham's attacks, they are four superheroes who continued to be published without interruption.

That Mystic immunity sounds like a good house rule!

wasn't GA in that group to?

Yeah, but out of bias against GA, I'm fairly committed to ignoring and/or burying that information...