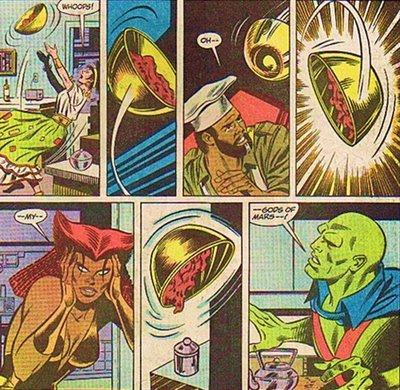 See? That's what happens when Vibe's not around to save the day...!
Posted by Scipio at 9:31 PM

Notice how the tumbling bowl of impossibly-slowly-falling chili purposefully flipped itself over to avoid spilling on Dale Gunn.

Because while chili is just spices, tomato, and ground meat, chili ain't stupid.

I actually think this is the only Detroit-era JLA book I read when I was a kid. I remember this sequence and seem to recall that it is a certain Mr. Dibney who rescues Mr. Gunn from a horrible chili-related death.

Am I wrong? Do we here at the A of D not have the right to smirk? Even if we don't, we shall do it anyway.

And if you allow to me break away from the annoying wasn't-that-funny-in-the-first-place-Dibney-worship-schtick for a second, it's weird how I was able to remember this image and what follows it so vividly, even though it's been 20 years (give or take a couple of years) since I last saw it. For a comic so many people seem to hate, this one issue sure did leave an impression.

As an ex-Detroiter, I love it when the Detroit-era League gets ... err ... respect.

"But there are the kind of moments that, honestly, you just can't experience outside of Detroit."

"For a comic so many people seem to hate, this one issue sure did leave an impression."

Much like watching a bus full of nuns crash into an orphanage and explode, setting the building on fire, while onlooking neonazis and DMV employees laugh.

A world too mundane and sullied to sustain his sublime beautiful manliness, that's what!

A world too sordid to appreciate Sexitudinousness Made Flesh!

And a bowl of angry flying chili.

But was it Oliver Queen chili?

If only someone had superpowers...perhaps that bowl of chili could be stopped.

"Much like watching a bus full of nuns crash into an orphanage and explode, setting the building on fire, while onlooking neonazis and DMV employees laugh."

Oddly I did see something just like that when I was a kid, but I had completely forgotten about it until just now.

Thanks for the memories Mr. Garling, your's is truly the most noble of services!

"No time to get out of the way of that flying bowl of chili--only time to talk about it!"

What sort of sorcery or mad science would cause a bowl of chili to fly around a room like that?

And Giffen and De Matteis claim THEY invented the "funny" Justice League. Poseurs.

No, they invented the successfully funny Justice League...

In my view one and all may read this.
hot water heater replacement | how to trademark a name | houston ford dealerships