Okay, I need some help understanding the latest issue of Action Comics.

I liked it. I really did. I'm no fan of the whole Donner/Krypton/Jor-El schtick, but I'm enjoying the Silverish collocation of elements of the Superman myth: Luthor, Bizarro, the Phantom Zoners, the Planeteers, even a Parasite cameo. And the "twist" (which I didn't see coming but should have) at the end? Very Silver Age.

I like the Kubert/Stewart art, too, particularly the landscapes and vistas. 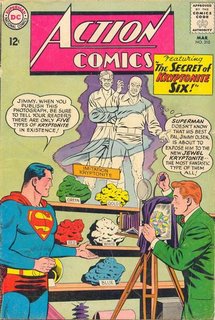 One of the things that made the dense mythology of Silver Age Superman possible was a fairly rigid adherence to rules and principles of pseudosuperscience (such as the Garanimal Radiation System; red vs. green kryptonite, red vs. yellow sun, etc.). Nonsensical or not, these were attempts at consistency that allowed a reader to evaluate whether a writer was being "fair".

But I can't figure out the "rules" implied in Action 845. I'm used to thinking in the "solar battery" mode that's held sway since Superman's reboot in 1986. But in the current Action storyline, it seems as if Kryptonians are automatically and immediately "superpowerful" upon showing up on Earth. The boy ("Chris") is immediately indestructible; the Zoners can fly immediately upon their release from the Penitentiary Baguettes; Bizarro has great power even though he's been sitting in the dark for 13 months. I don't get it.

Speaking of pseudoscience I don't get: Superman sets the area around Bizarro aflame and then, using his superbreath .... freezes the flames?! Empedocles, save me! 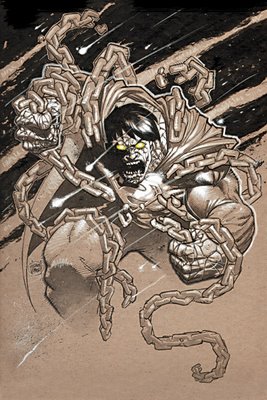 Pentitentiary Baguettes: why is there one in the opening scene? Is it supposed to be there? Does Superman not notice it? What kind of decorator plops a human-sized sweet potato in the middle of Disney's Fairytale Castles on Ice? Was Krypton doomed for its lack of style? Did the Kryptonian designer Broon-Etz try to warn them?

Speaking of style: I do love the Zoner's outfits. Zod in a hoodie; gotta love that. And with such brand devotion that they have throat tattoos to match their shirts' designer labels! The superfashionistas have arrived.

Zod's tattoo is the best. I don't know what it's supposed to mean, but it's identical to the Sims 2 Pets symbol for "command"; the same command pose he assumes (for no apparent reason other than drama) in the final panel. Kneel!

You know, there was only ONE thing about the "B13" infected City of Tomorrow Metropolis that I really liked: the Daily Planet holographic globe, because we didn't have to see the damn thing get knocked off the building every other issue. Which it does in this issue. Again. What do you think the business insurance rate are in that block?

Speaking of Metropolitan insurance rates... what's with the Frozen in Fear gene that at least 70 percent of all Metropolis residents have-- including Kryptonian Chris, who simply stands there as a bus falls on him? Dude, step back 5 paces and you'll be in the building... I think Luthor must have put something in the water that activates the Frozen in Fear gene in local residents; that why supervillains hang out there, knowing how easy is to endanger bystanders in order to cover their escape.

Speaking of bystanders... how many do you think Superman killed when he shoved Bizarro through the diner? The one with the conspicuous "OPEN" sign? Superman seems really upset Bizarro broke that kid's arm. Pity he wasn't as concerned about the dog he sent flying with the attached fire hydrant, which surely went from poodle to puddle in about 2 seconds. Tip for Superman: fly UP if you want to avoid propery damage (even though property damage is more fun to draw).
Posted by Scipio at 9:54 AM

If I had a dime for everytime they've shown us the Daily Planet's giant globe plummeting to the street as people below stare up in terror. As if they wouldn't have a good amount of time to get out of the way.

I actually wasn't feeling this run until Zod showed up. At least that puts a time limit on young Chris Kent's stay. I can only take so many superheroes as fathers at once.

I was hoping he'd call the kid 'Conner'.

All I wanna know is if you're in stasis and incorporeal, how does one make a baby or give birth in the Phantom Zone.

And why has Bizarro stopped talking backwards?

All I wanna know is if you're in stasis and incorporeal, how does one make a baby or give birth in the Phantom Zone.

Good question. But then, the post-silver age phantom zone seems to change with each writer who uses it.

I just want to say that I hate hate hate this whole Donner storyline. The guy directed a very good film 30 years ago, but has no real idea of what the characters are like today. Johns is so reverential toward him that he doesn't have the heart or the brains to tell him that the storyline is inane, repetetive, and a complete distraction to current continuity.

If it were being published as an out-of-continuity miniseries (like Singer's awful "Superman Returns" series), it might be one thing, but after the whole IC mishegas, we're already getting screwed-up continuity in the name of appeasing a guy who directed a film more than a generation ago? No thanks.

About Bizarro sitting in the dark and still being superstrong: if he's Bizarro, wouldn't the opposite of whatever helps Supes help him?

They were being irradiated with yellow sun radiaton while in the Phantom Zone.

Or maybe Donner doesn't really give a damn about continuity. Before Christopher, Kara was the last Kryptonian to reach Earth, and Loeb did pointed out she was being irradiated by Yellow Sun energy as an explanation of her powers.

Still, it's gonna be cool to see Zod saying his catchphrase, even if it's for the millionth time (and millionth Zod)