This is the way to spank the butt 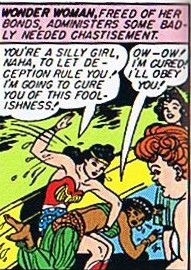 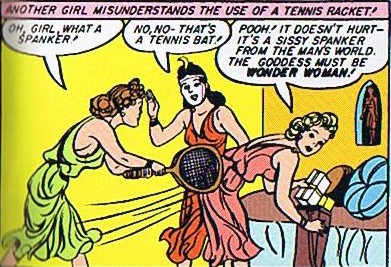 this is the way to spank the butt 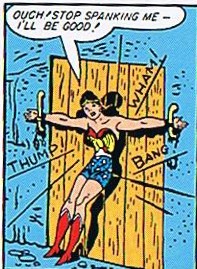 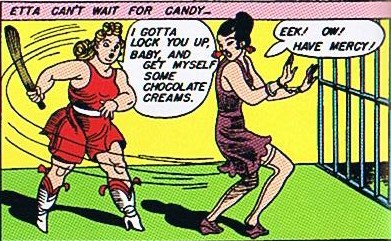 This is the way I'm bound and gagged 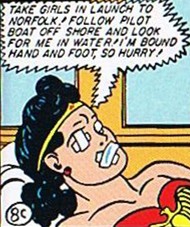 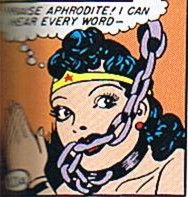 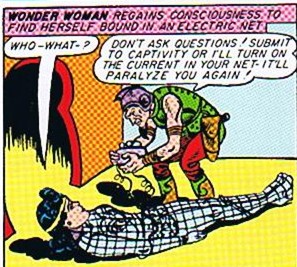 this is the way I'm bound and gagged 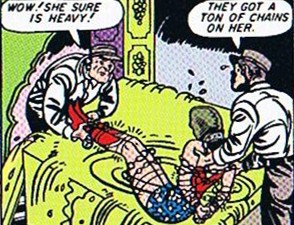 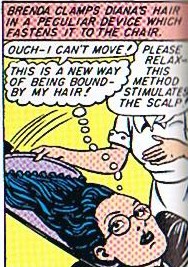 So is it reasonable of me to be hearing this to the tune of the song people bounce a kid on their knee for?

That single panel with the tennis racket says so much about the Amazons. Not the least of which is that she considers it a "sissy spanker"...and the lady in green talks like a Drag Queen.

I've had people argue that Marston's inclinations in no way influenced the story telling in the early Wonder Woman. They never read enough Wonder Woman, apparently. That's some kink.

"I've had people argue that Marston's inclinations in no way influenced the story telling in the early Wonder Woman. "

It has always amazed me when I've seen people claim that Wonder Woman's reputation for this sort of thing had been blown out of proportion--when you consider the amount of B&D that showed up in the Golden Age material that they'd deemed suitable to reprint in the 60s and 70s, it only stood to reason that there was even more in the "unsuitable" stories. And now, thanks to the DC Archives, we can finally see just how much more. It's not for nothing that WW's two main weapons are her Lasso of Obedience and her Braclets of Submission...

Mark Foley and Ted Haggard are kinky. Marston is off the charts.

"Oh girl, what a spanker". You can hear the LONGING in her voice.