Yes. Batman. Oh, it wasn't flashy like the Dr. Light and Firehawk makeovers. And it didn't happen in Crisis on Infinite Earths on panel, but it happened nonetheless. 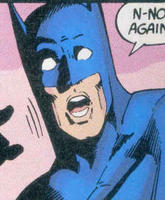 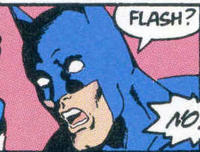 A wide-eyed goober, superpowerless from the waist down AND the waist up.

Sorry, gang. I'd love to blame Wolfman for this, but I can't. That's really how the Bronze Age Batman was.

In the Bronze Age JLA, even Aquaman could hit hard. But useless (Hi, Marv!) Batman mostly got stuck just piloting some Batvehicle. He spent all his time hanging out with -- how do I put this in a loving and supportive way? -- third-rate schmoes. Elongated Man, 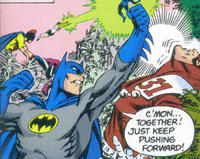 DC made a huge deal out of re-starting Superman and Wonder Woman, post-Crisis. Clever bit of misdirection, that. Yeah, Clark and Diana shed lots of their excess backstory in a big hypertime yard sale (I was there, and let me tell you, Alex Ross and Phil Jimenez are vicious little shoppers ....!). But, when you come right down to it, their personalities and costumes stayed nearly identical to their pre-Crisis versions.

But Batman? Well, this is Batman post-Crisis: 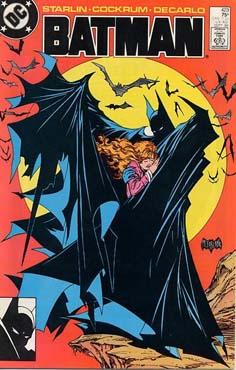 And that's before Jason got killed and he started to turn really scary.

The modern age Batman can star simultaneously in 11 different titles, guest-star in 3 others, appear in the second issue of every new series, and alienate the superhero community and the GCPD, while cobbling together a world-threatening omniscient artificial intelligence in his spare time. The post-Crisis Batman is more like the Golden Age one; he can defeat the arsenal of a terrorist country using only a paper clip and a Q-tip, increase voter turn-out through sheer force of will, and automatically cause anyone within a twenty-foot radius to have 34 percent fewer cavities. The modern Batman doesn't stand around uselessly during a Crisis ... he causes it. You show 'em, B-man!

Fooey on all those of you who think you want back the pre-Crisis Batman because this one "is a jerk"; I say you've forgotten what he was like. The post-Crisis Batman was the REAL Sensational Character Makeover of 1986, and don't you forget it! 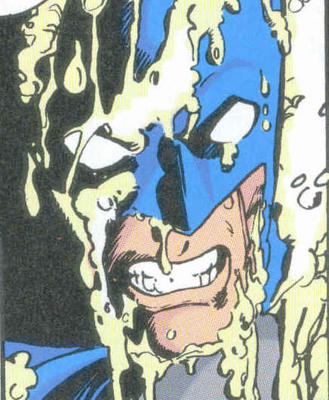 The post-Crisis Batman is the greatest comic book character of all time. Period.

While at times I appreciate he has not been written well, his machinations in the DCU are felt more than any other character. His presence in the big three (alongside an alien powerhouse and a woman with the abilities of Gods) and ability to suport an entire family of titles (not matched by anyone else in comics today outside the X-Men (which isn't even a fiar comparison)) are testament to his versatility and brilliance. There are a lot of Batman stories to be told-writers want to tell them and readers want to read them.

Pre-Crisis Batman was pathetic and lame. You might as well have been reading about that farcical Bat-wannabe Green Arrow. But at least he smiled!

The biggest problem i have with post crisis batman, is that he really isn't the detective he once was before crisis. I really did enjoy alot of the stories were he used he intelligence to solve a case not his fists.

While I agree the lame attachment to the Outsiders and such was hokey, I just can't stand what he's evolved into over the past 20 years.

I have no real wish to read anything with this Batman in it in the same way that I can't stand Wolverine over the past 20 years either.

Over exposure and the character's omnipresent "assholism" contributed to my general loss of interest in any appearance.

And yeah. I miss the Detective too.

I haven't been able to stomach Batman post-Crisis. The directive at DC has been to turn him into a friendless social outcast with no redeeming qualities, maybe one step better than the scum he fights. The Bronze Age Batman, on the other hand, was not campy and ridiculous like his 1950s and early 60s version, but was, in every sense of the word, a hero. Read Doug Moench's run on Batman and Detective from 1983-86. I admit a lot of the Natalia/Night-Slayer stuff got old real fast, but by and large that was the Batman for me.

Being a jerk doesn't make you any less of a hero.

Maybe not, but it makes me not want to read about you.

Um, Scipio, from the looks of Batman from that final scan, it looks like you really, REALLY were excited by pre-Crisis Batman.

Good heavens waiter, I'll have what Scipio's having.

Actually, Ariel, the JOKER did that.

"The post-Crisis Batman was the REAL Sensational Character Makeover of 1986, and don't you forget it!"

Why is it that no one clamors for the Fifties Batman? The outer space travelin', big-smilin' scoutmaster with a jones for his young ward in chainmail panties?

Will no fanboy stand up and cry "I miss the days of Batman meeting Venusians?"

In a perfect world there would be two Batman books: one by Grant Morrison filled to bursting wacky hyper-scientific hi-jinks, the other by Christopher Priest, a careful character study of a true urban nightmare. (And Johns, Miller, et al would be locked in a mylar bag until they ate each other.)

In a slightly less perfect world, Batman would get a clue, stop being punked by sixteen year old girls, and start living up to the title "Darknight Detective". And Ted Kord would still be with us to meet Venusians.

In the post-IC DCU, Batman will be on Prozac, Blue Beetle will be a magic-weilding Spider-Man clone, and I will finally be forced to read "Iron Wok Jan" if I actually want to enjoy comics.

I like the pre-Crisis Batman. Denny O'Neill's interpretation of the character was pretty good, I thought. He was a little more flexible in approach.

But then O'Neill wrote a few issues in the nineties, too, and it was substantially the same character.

I foudn a recent Quizilla "What Batman are you" online quiz, but apparently it only returned answers like "JLA Batman" and "Dark Knight Batman" and other recent versions.

When I posted the quiz results on my little stuffed blog recently, I had to resort to making up my own answer (that is, I outright lied about my result):

"You're 1950s Batman. Sure, you're still a scourge of criminals and all that is evil, but you don't forget to have a fun time battling crime as well. You have a sidekick that you support and joke with, not that you use as a pawn in an unholy bloody crusade against the underworld. Your adventures include giant gorillas, space aliens, multi-colored Batman outfits for all occasions, time travel, immense typewriters, and multi-dimensional imps. You're the Batman with a Bat-Hound. You're not merely 1950s Batman, you're fun Batman. Your likes will never be seen again in modern comics."

After that last scan, how do you not come back as a bad-ass? You really have nowhere to go but up after suffering that kind of humiliation and degredation.

There should also be some love for late Silver/early Bronze, Denny O'Neill/Neal Adams and Steve Englehart/Marshall Rogers Batman. Okay, he pulled back from the silliness of the alien-fighting and go-go racing stripe Batman to be a 'Darkknight Detective', but he wasn't a huge *jerk* about it like post-Crisis Batman became.

Is that a McFarlane Batman cover there? It certainly seems like his Schizophrenic Cape style.