[I'm re-posting this because I'd like to see fallout from Villains United & Rann/Thanagar that gives arms-dealer Penguin access to some serious off-world tech ... most of it small enough to build into, say, an umbrella. Think about the Penguin with a Mother Box umbrella...]

This, ladies and gentlemen, is the REAL Penguin, in his first appearance.

Why do I care? Because I am sick to death of watching the Penguin get beaten up every month.

It's become a cheap writer's shorthand for "our hero's getting tough now", and it's been beaten to death (as has, by now, the Penguin). As much as I love Robin, when he start beating up the Penguin in his title this month, I was rooting for Oswald to silence the upstart with a whiff of finely filtered Penguin gas and deliver him right into the arms of an exploding octopus. Or a giant clam. Yes, a big hideous man-eating clam.

The real, original Penguin (who I'd like to see returned to us now, DC, thank you) is the one above. He appeared VERY frequently in Golden Age Batman stories and his personality was very consistent, as follows. 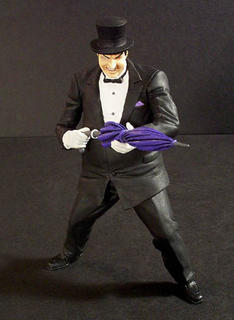 He's also a completely amoral cold-blooded killer.
He does not get flustered and is well aware that, even if you foil his plans, he's going to escape.
He is well aware that he appears non-threatening, even silly, and uses that to his advantage.
If you are rude to him, he will slit your throat with a razor sharp ferrule, and, as you lie on the floor choking on your own blood, the last thing you'll hear is him calling the florist to send condolence flowers to your widow -- more expensive ones than you ever bought her in your life.

He is not "your stoolie".
He does not get beaten up.
He does not have flippers.
He is not gullible, stupid, crude, uneducated, foul-mouthed, or even ill-tempered.

DC, treat your villains with respect and they'll earn their keep; just ask the Riddler and Catman. Start treating the Penguin with the respect that his over 60 years in the business deserves, and you'll have a much more interesting, viable, popular character.

Email ThisBlogThis!Share to TwitterShare to FacebookShare to Pinterest
Labels: Golden Age, Why we hate Adam Strange and the Dirty Stinking Rannies

Calling for the original version of a character to be the "real one" would make for a dubious precedent in comic books, and one that I doubt you're actually advocating here, unless you're actually prepared to toss out the Silver Age on principle.

At any rate, I don't see THAT much of a distinction between the refined, articulate, cold-blooded killer of the Finger/Kane comics and the refined, articulate, cold-blooded master criminal of modern times. The latter may wear top hats slightly less often, goes by his given name more than his pseudonym, and has mastered the loopholes and flaws of the criminal justice system to ensconse himself as a nominally legitimate figure while ruling a criminal empire; that he's no physical heavyweight hardly detracts from his menace. More to the point, the precise nature of his menace remains intact: he is the elite criminal, the connoisseur who is driven to hold himself above the rest of the underworld refuse. In fact, the modern interpretation refines this point further: why should the Penguin be a fighter? He has little people to do that for him.

The biggest slight to the Penguin in modern times hasn't been intrinsic to the character, but has been the various Bat-writers' refusal to do anything with him. Oswald Cobblepot should be running the Gotham mob, not a schmuck like Black Mask.

And nobody, not even the World's Greatest Detective (at least not without a lot of luck) should be able to actually prove that, no matter what shmuck gets set up for the Batman to knock down, the money going through the Gotham mob always winds up lining his feathers...

Yeah, this whole 'Penguin as Batman's information source' business has to end, soonest.

"A criminal... me? You must be insane, old boy. Everyone knows the Gotham underworld is run by that idiot with the skull-face."

Thta would be the way to do it. Make the Penguin the ultra-manipulator, the criminal Batman, essentially.

I don't read much Batman stuff, but yeah, you can't just slap the guy around all the time. It's just silly. If any of the Gallery should find out Batman's identity, it should be the Penguin. Then we might see some Born Again style antics.

I think it was fairly obvious in the movie that, even though the Penguin supplied the manpower and submarine, Catwoman was obviously the leader. Without her, the other three would have killed each other.

No where's THAT version of Catwoman! We need her being the boss of the Joker!

"Does someone at DC have a sexual fetish for seeing formally-dressed fat men with big noses get the snot beat out of them?"

Oh thank God! I'm not alone! (sob) I knew there were other Penguisexuals out there. Now I can be out and proud!

I remember reading a comic way back when that retold Penguin's origin which had him shoot the guy point blank in the face. That's always been how I think of the Penguin; as a ruthless bastard.

Penguin's Batman's stoolie now? Ugh. I haven't read much Batman in the last three years. How long has this been going on.

To rectify the situation: Penguin sets Batman up. Batman gets schooled by [insert subject of set-up here]. He is humiliated in public. Has anyone used the Penguin in this manner?

If it was the original Penguin then he would be manipulating the information Batman is getting from him for his benefit.

Personally, I enjoyed the version in The Animated Series (the good one, not the current one), where he was the Legitimate Businessman that Batman couldn't quite get enough on to keep in jail.

Maybe Zatanna and the JLA got to the Penguin, making him the lovable buffoon we all know today.

Plus, the Penguin is about the only one of Batman's Rogues Gallery who isn't a living manifestation of the dichotomy of the human personality. Or something.

Though Penguin was "the head" of United Underworld and Catwoman held them together, Riddler came up with all the plans (don't cite me on this because I own the movie. Yes, I am the last person on Earth with a VCR). Dosn't that count for something? By the way, Killer Moth would have rocked in that movie, had they given him the same costume he had in the comics and had him portrayed by a decent actor. Tim Herbert indeed.

It will not really have effect, I feel like this.
extended product | juniors clothes | medicare card

A bit of a history lesson (that's probably unnecessary for the author, but there might be newbies reading this): the whole Iceberg Lounge thing was invented by Chuck Dixon during the 90s (shortly after Knightfall wrapped up, come to think of it). In its premiere story, it was pretty clear that Batman wanted to bust the Penguin, but couldn't on account of lack of evidence.

Now, it's pretty much become: "Batman can bust Penguin whenever the hell he wants, but doesn't because he's got REAL villains to catch".

The little guy deserves better. Not to go all Grant Morrison-y on you guys, but I think that he's the perfect reflection of just how ridiculous the concept of Batman is. Moreso than even the Joker.