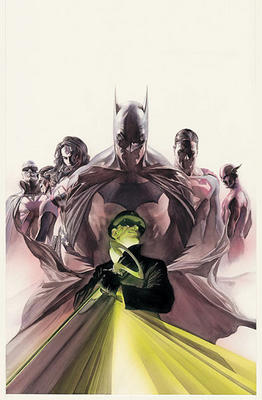 I wasn't prepared to enjoy issue 2 of Alex Ross's Justice this week. I'm not a fan of Ross's art (though he has an imaginative flair for costume design!), and the only thing in issue 1 I enjoyed were two character moments for Aquaman. Seeing Aquaman on Storm was fabulous and underwater wit doesn't get any drier than "Arthur, there's a shark to see you."

But issue 2 had the Riddler and Ross, who beautifully captured the simplicity of Riddler's backstory and complexity its results, did a good job with him. Almost no one does a good job with the Riddler, and his interactions with Batman were chockful of delicious layers of remarkably unforced comic book irony.

Mysterious scenes of Prof. Crane (the Scarecrow) and Dr. Isley (Poison Ivy) using their abilities for dramatic charity work have me hooked and the Joker's frustration at not being part of the Legion of Doom has that touch of meta-fictional flavor that works so well with Mr. J.

And Brainiac? I haven't been scared of Brainiac since his appearance in Alan Moore's "The Last Superman Story".

Fine, I'll pick it up. But I'm skeptical though, skeptical I tells ya! Let it be on your shoulders, man!

How much of it can be attributed to Alex Ross, as opposed to Jim Krueger?

I actually passed on this one based on how little I enjoyed the first issue. Guess I'll need to pick it up after all.

Brainiac = Creepier than EVER!

Jim Kreuger's an excellent writer. I know Kingdom Come was crap but I'm really looking forward to every issue of this series.

And thank god someone has finally figured out how to do a good Brainiac again.

I like that they explained Riddler's stupid compulsion again. I never realized it made any sense before.

I was shocked to find out this issue was so much better than the first. I was all set to drop the series, but now I want to see what Brainiac has in mind...

Is it just me or does this comic have the same plot as Villains United only with a better premise?