There are shining gem-like moments in the rubbish that is Crisis on Infinite Earths. Let's do celebrate some! 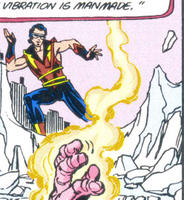 As mentioned in a previous post, comic panels don't get much better than Paco's post-Plasmus pop-and-lock performance.

That, by the way, is Vibe's winter outfit. Only time he got to use it. Jack from the Royal Flush Gang bought it at the Estate Sale while I was busy looking for any remaining bikini briefs. 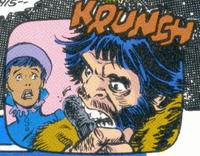 A neanderthal eats Lois Lane's microphone. Naturally, a neanderthal is no more capable of eating a microphone than you or I are, and, given their dental hygiene, it's likely that a neanderthal's teeth would all fall out if he tried to eat even, say, an apple. Maybe he's from Bismoll? The whole thing is so ... Silver Age. It really needs a thought ballon from Lois thinking something like, "That caveman is eating my microphone! He must think it's some sort of unknown fruit! Luckily, it's a remote 'mike' without a cord to a power source, or he might have gotten quite a shock!" Yes, that would be very Silver Age, indeed. 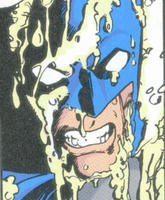 Batman gets covered head to toe in gelatinous mucilage. Batman covered in anything is funny. The goopier, the funnier. And the fact that this is the last thing Barry Allen sees before he dies is hilarious.

Batman actually reaches for his universal solvent from his utility belt, with a close up even. The only thing this panel lacks is voiceover by William Dozier: "Horrors! Batman, pasted, pinned, and powerless! Is our hero finally stuck? Stay glued to your seats until next week; same bat-time, same bat-channel!"

"Shut up, Element Lad. You don't know anything" is one of the great paragraphs of the English language. For some 30 odd years, Brainaic 5, who with his obscene 12-level intelligence is the smartest being in the 30th (or for that matter any) century, had has to grit his teeth, smile, and treat his brain-dead Legion comrades as if they were equals. This is more ridiculous than my taking my dog's advice on the stock market or asking a parrot what it thinks of the continued relevance of the Michelson-Morley experiments in light of quantum mechanics. Finally, in Crisis, Brainy just can't take it any more. Brainy could have appropriately made that comment to almost any Legionnaire (except Lyle), but it's particularly funny because it's that sappy, New Age, nappy-headed, curd-munching, pacifistic, pink-clad pansy, Element Lad.

In this startlingly dadaesque panel, Earth-3 seagulls lament their inability to outfly the antimatter walls and ponder the cruelty of the gull gods.

Meanwhile, the Earth-3 Mark Trail attempts to bury his own head in the sand. Isn't it nice to know that even essentially evil people like the beach?

This is the kind of panel DC needs to reproduce as one of those Inspiration in the Workplace posters. You know -- for evil people. They have offices, too. Probably near yours.

I don't know anyone who thinks Marv Wolfman is funny. That, I assume, is because he isn't. His attempts at flippancy-based wit sound exactly like what a nerd thinks cool people sound like (I wonder whether he knows Joss Whedon?). Just as Archie characters are a child's idea of what teenagers are like, Wolfman's characters are a boring nerd's idea of what interesting hipsters are like.

This classic example,"Fetus Marvel", is such a horribly off-color remark, I'm shocked the editors let Wolfman use it. It's also imbecilic, considering that Beast Boy comes from a universe with Superman, Supergirl, Superdog, Superhorse, Supercat, Supermonkey, Superboy, and the Super-antfarm of Kandor.

The Penguin Vs. Firestorm

In this panel, the Penguin has taken his rightful place among the 30th century's most fearsome villains, the Fatal Five, and is fighting Firestorm (who has godlike powers of molecular reorganization) to a standstill. You go, Pengy.

Blue Devil says "eeek!" when he misplaces T.O. Morrow. It's uncanny; that's exactly what I would say if I misplaced T.O. Morrow.

I really never liked Blue Devil before. But after reading that panel, now I do it; I get it, I finally get Blue Devil.


Any other moments that stand out for you?
Posted by Scipio at 6:40 PM

And I can imagine Barry Allen's last words before disintegrating...

You *have* to take on Kingdom Come sometime soon. Please.

what the f is penguin shooting at firestorm that he must repel it with his powers?

That Penguin bit is a thing of beauty. I knew he had it in him!

I've already commented on my favorite Crisis moment elsewhere on this blog; when Power Girl is whining about having so much power and being unable to stop the Crisis, and Huntress tells her to suck it up and get to work.

Oh, yeah, and the panel where the Golden-Age Superman slugs Captain Nazi is pretty cool too.

I like the panel where the giraffe is rescuing B'Wana Beast or the Freedom Beast or whatever he calls himself. Is that meant to be heroic? He's riding an endangered species to safety. Sure he has fingers to point with but I'm fairly sure the giraffe could manage on its own without the added weight.

Phobia: "Now, girl-- What is your greatest fear? What will cause your mind to become numb with horror?"

Cut to close up of Tina's face, lookin' mean, confident, and shiny.

I think it's way past time nasty, hulky, modern Despero gets his ass stomped by a sparkling robot girl

Yes, Frank! I ALMOST included the "Tina bitchslaps Despero panel" in this post!

See? All these moments are why I love Crisis On Infinite Earths.

John Constantine and Steve "Mento" Dayton reacting in the sanest possible manner to the crisis: getting roaringly drunk.

I love the George Perez crowd scenes, with everyone standing around looking concerned, confused, or furrow-browed and sad. That's with guys like Warlord, Blue Devil, and the Creeper; guys with bizarre costumes on a good day. I'm surprised Superman doesn't call them on it: "Universes are ending, guys, would it kill you to wear pants?"

Your loook back at Crisis has been a scream.
A few weeks ago, I dug Crisis out of the long box for the first time in many many many years, and re-read it. I was SHOCKED at how unredeemably bad the story was. I winced and grimaced thru issue after issue, and realized that I must've been stoned back then.

I like when all the apes are worried about Solovar, and they show Detective Chimp.

Because, you know, Det. Chimp is a DC character, so he HAS to be in Crisis.

And he's a chimp dressed like Sherlock Holmes, but it's Crisis, so he HAS to look serious and concerned.

You left out the part in Issue 1 where Firebrand pretends not to hear Superman-2 saying hi to her, as if he were a nonperson. Supes takes the dis with style - "Gee, Obsidian, maybe she didn't hear me!". Sure. Superman is known for his low speaking voice and tasteful, non-obvious outfit.

I also like when Changeling-as-elephant gets thrown through a wall on Earth-S.

Hey- you also left out when the Atom is rescuing Billy Batson, who's unguarded and wearing a gag.

"Psssst. Hey kid- are you Batson? Nod your head if yes. I have no idea why I'm rescuing you...but here goes!"

SHAZAM! Poor Ray, burnt to a crisp by magic lightning.

By the way, check directly above the Firestorm vs Penguin panel. Turns out Vibe did get a line in Crisis, after all.

Wow, this makes me want to read COIE. I've never read it.